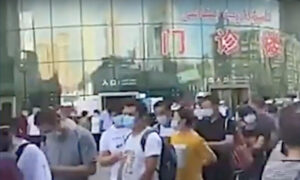 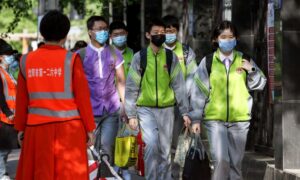 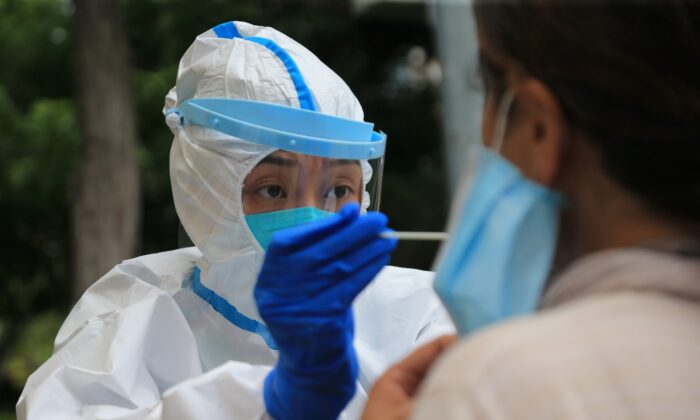 A health worker is carrying out a COVID-19 test in Dalian, in China's northeast Liaoning Province on July 26, 2020. (STR/AFP via Getty Images)
China Society

Residents of Dalian Bay district, a heavy-hit area in China’s latest wave of the CCP virus outbreak, complained of authorities’ mismanagement of lockdown regulations. Unable to leave their homes, many said the prevention measures were too extreme.

Since at least late July, the northeastern Chinese city of Dalian has experienced a third-wave outbreak of COVID-19. The contagion has since spread to nine cities across five Chinese provinces, including Beijing. The climbing virus cases prompted a recent visit from Vice Premier Sun Chunlan, whose last inspection tour was to Wuhan, the world’s first CCP virus hotspot.

Dalian authorities implemented a lockdown in an attempt to contain the spread. Dalian Bay has been under full lockdown since July 26.

Fujia Newtown is an apartment complex in Dalian Bay. The entire community has 12 apartment buildings.

After a 13-year-old residing in the complex was diagnosed with COVID-19 on July 22, the complex went through three weeks of lockdown. As the ban was being lifted, Fujia residents were still confined to the complex area.

Mr. Liu of Fujia Newtown told The Epoch Times that on Aug. 16, residents gathered downstairs and demanded an explanation from local authorities. However, only one female staff arrived and she gave no explanation.

Liu said residents had come downstairs voluntarily. “We wanted to know why we still couldn’t go out while other places had already removed the ban.”

A resident said that in early morning on Aug. 17, several police motorcycles and more than 10 police cars were guarding the complex area.

“During the lockdown, many residents tried to call [local authorities], but to no avail. Those people seemed to have vanished,” Liu said, adding that community officials failed in their duty to convey pandemic information to residents.

Another resident said a pregnant woman was having contractions, but was delayed for three hours before she was admitted to the hospital. The mother went into premature labor and the baby was born prematurely.

The resident said: “After three rounds of nucleic acid tests, the complex was still locked down. We need to live, we need to eat. There’s no knowing when it will be over. Grocery delivery provided no options. When the food arrived, it’s already rotten. What else can we eat?”

Liu similarly said that because the online groceries platform is so expensive, he relies on his remaining supply of rice and noodles to save money.

Liu lives by himself and lost his full-time job years ago. He had been a steel factory worker with more than 20 years of experience. He now works as part-time security.

“The first week [during lockdown] was really depressing. You had no idea what’s ahead of you, the job, the living expenses, so many worries. And I’m guarding the phone every day, watching news as a way of communicating with the outside world,” he said.

On his birthday, July 31, “I cried. It was too painful. I cooked some noodles for myself. It’s really sad. Usually my relatives and friends are here, and I also have a daughter. [This year,] I sang a birthday song at home alone.”

Authorities recently said Dalian Bay is now a low-risk zone, giving Liu hope that the lockdown will end soon. He celebrated with a toast on Aug. 16. His company’s leader also told him that he can go back to work when the lockdown is over.

Local officials agreed to “unlock” Fujia Newtown on Aug. 19. The community also issued a notice demanding that residents register for a pass, which will be required for entering and exiting the complex.

Mr. Liu said that local officials didn’t promise when the local public bus will resume operations. The community is located in a rural area, so it would be inconvenient if the bus service doesn’t resume, he said.

The lockdown policy was imposed suddenly and caught many local residents off guard.

A source in Dalian disclosed that his coworker’s health QR code suddenly turned red on the morning of Aug. 17. The QR code system was implemented nationwide as a way for authorities to keep track of citizens’ COVID-19 status and determine whether they can pass through checkpoints.

The red health QR code means the coworker must stay at home. His company said that he could only verify with the district administration about the situation.