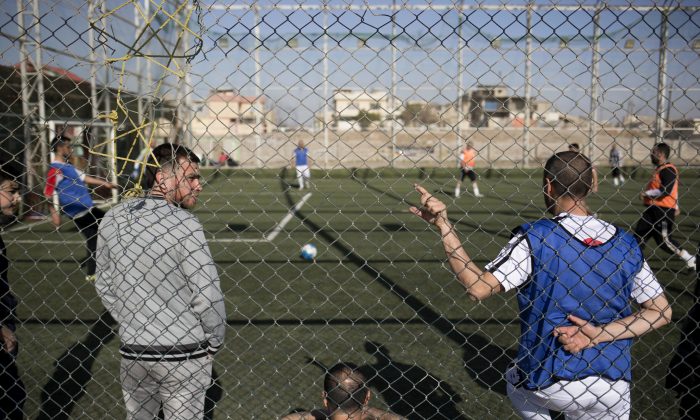 Mosul residents play soccer on a pitch in the liberated eastern part of the city on Feb. 8, 2017. (AP Photo/Bram Janssen)
International

MOSUL, Iraq—After months of fighting, Mosul residents can finally practice their favorite game again at a soccer field in the eastern part of the city—and this time without the restrictions imposed by ISIS terrorists.

The venue was closed for almost four months while Iraqi forces and militants fought a fierce battle for the city. Signs of war are still visible, with broken windows and damaged fences surrounding the field and with holes in the rooftop of the canteen.

“It was closed for three to four months and we reopened after the liberation,” said Abu Laith Mohammed, the manager of the soccer field.

The field was allowed to stay open when ISIS controlled the area, but the militants imposed strict rules on the game, including a dress code that forced players to cut teams’ insignia from their jerseys and a ban on referees’ whistles.

“It wasn’t as much fun,” said 26-year-old Obeyda Mohammed after he finished a game one afternoon with his friends. “They introduced new rules that never existed in sports before.”

The players weren’t allowed to wear logos or brand names on soccer shirts because the militants considered them to be idolatrous.

“I had to stand at the entrance of the pitch with scissors,” said 31-year-old Mohammed Sadiq, who works at the soccer field. He then had to cut the logos of teams such as Real Madrid and Barcelona from the jerseys.

“They called them infidel logos,” he said.

Soccer is very popular in Iraq and many people root for big European teams like Manchester United, Chelsea or Barcelona.

“We couldn’t wear shorts. We had to wear trousers like this,” said Obeyda Mohammed, pointing at a tracksuit one of his fellow players was wearing.

“But it had to be baggy, not tight. By the way, the brands and logos of companies like Adidas, Nike and the others were forbidden.”

The militants also ordered the referees not to use whistles during the game “because the sound would make the devils gather,” the players said.

Trophies and medals were also forbidden because it was thought that they would encourage greed. Tournaments could not be organized either.

Mohammed Sadiq said there wasn’t a time limit on a match, which under normal rules should last 90 minutes, and ISIS terrorists would typically abandon the game after 15 minutes or so when they didn’t feel like playing anymore.

Games also had to be stopped for prayers.

“I had to bring prayer mats for the players and put them on the football pitch and lead the prayer for them,” he said.

The terrorists also made the players remove the five Olympic rings from the building because they said it was the sign of infidels.

“We tried to tell them it represented the five continents and had nothing to do with the infidels but it was useless. We had to bring a blacksmith with a grinder to cut them off,” Mohammed Sadiq said.