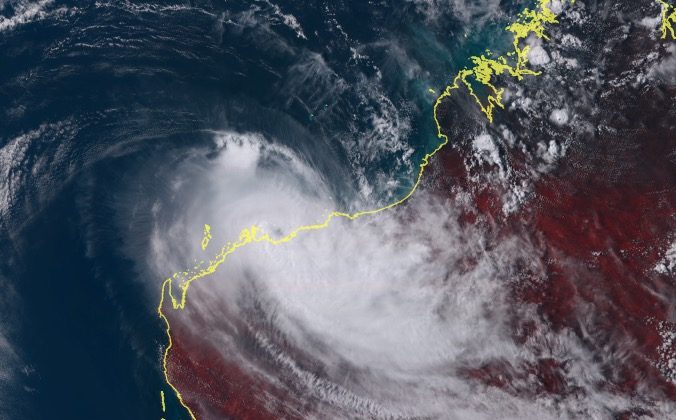 Residents along Western Australia’s Pilbara coast have bunkered down as Cyclone Veronica has hit the coastline.

Residents have bunkered down as an unusually powerful and slow-moving cyclone hits parts of the West Australian coast.

Even those who have weathered previous cyclones are being warned to stay indoors because Cyclone Veronica “is different” from previous storms, having timed its arrival along with a Spring tide.

The full impact of severe tropical #CycloneVeronica is beginning to occur on the #Pilbara coast. Info current at 11 am AWST Sunday 24 March. Watch the full video on YouTube at https://t.co/1KLYZ5brIl. Check warnings on our website; follow advice from emergency services @dfes_wa pic.twitter.com/jemXxPBoMp

A red alert has been issued for residents along the Pilbara coast to find shelter and brace for destructive winds of up to 155km/h, wind gusts up to 220km/h, and rising tides.

Veronica hit the coastline of the Pilbara region between Dampier and Port Hedland on Sunday morning.

“People in that part of the world are used to cyclones but this one is different.”

The slow-moving system was downgraded to category three as it continued to move southeast at 8km/h, according to the Bureau of Meteorology.

“The rain has petered off a bit but it was belting down,” he said.

“The winds have picked up a massive amount. On social media, we’ve seen a few trees lifted out.“

“I’m concerned about the cyclone surge because it’s a Spring tide which is the highest tide of the year so we’re expecting a surge of 2-5 metres,” he said.

The Departments of Fire and Emergency Services’ urges residents in red alert zones to seek shelter in the strongest, safest parts of their homes and to stay clear of doors or windows.

They said people would need to stay in shelter longer than usual due to the destructive storm’s slow pace.

Power companies have also advised local residents to prepare for extended power outages as no crews will be able to go out for repairs during a red alert.

The premier, commenting on reports people had ventured into the storm for selfies, warned against “stupid” behaviour.

“Don’t take matters into your own hands,” McGowan said.

Veronica will move across coastal towns including Port Hedland, Karratha and Pannawonica, with wind speeds expected to exceed 165km/h later on Sunday.

Bureau of Meteorology senior forecaster James Ashley said Veronica was unique because it was a slow-moving system that would bring a long period of destruction.

“We are expecting a prolonged period—12 hours or more—of destructive winds near the core of the cyclone.”

In lockdown as TC Veronica starts to cross the Pilbara coast. 100’s of homes have already lost power. @7NewsPerth pic.twitter.com/LwY7AwvKww

Veronica is the third tropical cyclone this season and it comes as cyclone Trevor whips through the Northern Territory.

The last category four tropical cyclone to hit the Western Australia coast was Christine in December 2013.

By Perry Duffin and Emily Cosenza