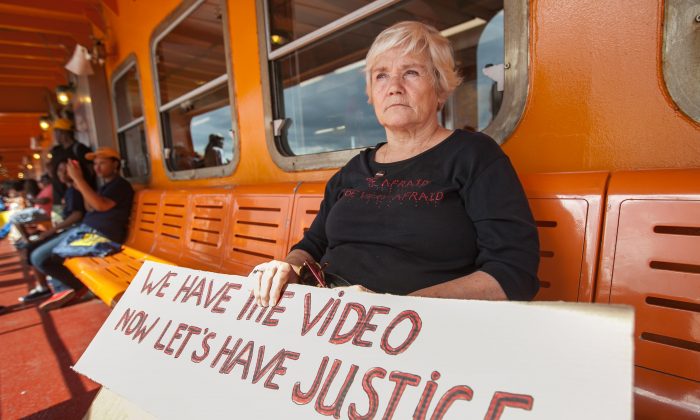 Karen Hofmann, 71, on her way to a rally against police brutality on Staten Island, Aug. 23, 2014. The rally was prompted by the death of Eric Garner during a police arrest where he was put in a chokehold by police. The act was captured on video by a passerby. Its public release prompted a storm of complaints, as well as reforms at the NYPD and the independent Civilian Complaint Review Board. (Petr Svab/Epoch Times)
New York

NEW YORK—An independent agency charged with vetting complaints from the public about police misconduct held its first public board meeting at nighttime in over 10 years Wednesday evening.

The meeting’s Staten Island location was just a few blocks from the site of Eric Garner’s recent death, where a police officer used a chokehold while attempting to arrest him for selling loose cigarettes. Some residents expressed anger and raised complaints that the agency does not do enough to hold officers accountable. Several called for the prosecution of Daniel Pantaleo, the police officer who placed Garner in the chokehold.

The Civilian Complaint Review Board (CCRB) is investigating the more than 1,000 chokehold allegations they received over the past five years. Completion of the previously announced study will be delayed by a few weeks and will be released in September to make it more complete, board chair Richard Emery said.

Although reluctant to share details before the study’s public release, Emery said that the findings so far indicate certain police precincts in the city have much higher insistences of chokehold allegations than others.

The study also evaluated how the agency handled the allegations, and found that it did not use uniform standards to categorize complaints as chokeholds—thus leaving room for some chokehold cases to go unidentified.

Emery said he recently met with the police department to discuss a disciplinary process that would include sanctions against officers who violate rules, but expressed that he believed the police commissioner should have the final say over whether officers need discipline.

The CCRB only has the power to investigate complaints, but not to discipline officers, Emery said.

The board also discussed encouraging more complainants to use mediation to resolve cases sooner rather than move forward with investigations.

But some in the audience disagreed. “It’s unacceptable that what this agency is about is mediation,” said Chris Dunn of the New York Civil Liberties Union. “That’s what police officers would love to do, go to a meeting, then go back home.”

The CCRB said it was working on setting up a complaint tracking system on its website and a 311 app that will allow people to file complaints and upload video evidence online. It is also considering complaints centers operated out of vans where people can find them more easily.

The agency will also collect data by next month on the number of complaints that arise from bystanders who get arrested while videotaping police arrests, Emery said. Officers were reminded in an internal memo released Aug. 6 that videotaping arrests is completely legal, according to a Gothamist report.

A Claim of Wrongful Arrest

During the public comment period on Wednesday, Frank Stevens, a Staten Island resident, took the opportunity to confront the board members about a complaint he filed in June 2012.

He said after a police car made a U-turn and knocked him down, fracturing his ankle, police from the 120th precinct (where officers involved in Garner’s arrest were from) got out of the car and proceeded to hit him and yell at him.

Stevens, who was handcuffed en route to the hospital and charged with false impersonation, believes he was racially profiled.

He said he received the results of his investigation in September 2013, finding his complaint unfounded. It was more than a year after he first filed the complaint.

On Wednesday, the board took his documents and said they will look into his case.

The agency said it would like to continue meeting in local communities where many of the complaints take place. The next meeting will be held in the Bedford-Stuyvesant neighborhood of Brooklyn.