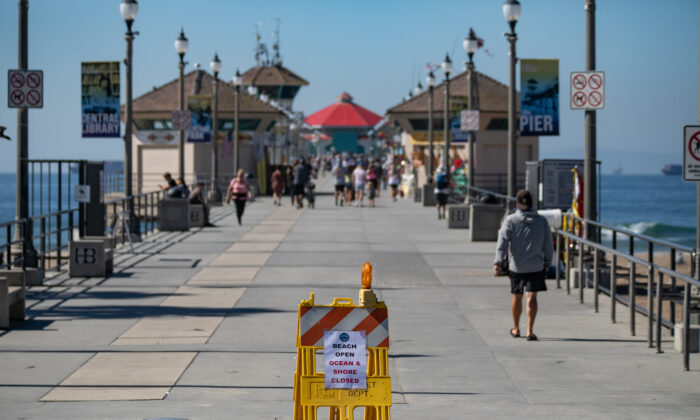 Cleanup efforts are underway in Huntington Beach, Calif., to clean a massive oil spill that struck the coastline on Oct. 3, 2021. This photo of the Huntington Beach pier was taken on Oct. 5, 2021. (John Fredricks/The Epoch Times)
Southern California

HUNTINGTON BEACH, Calif.—As the operation to clean up the Huntington Beach oil spill proceeds, county residents and visitors reflect on the accident.

The shore of Huntington Beach remains closed to the public with yellow caution tape, prohibiting beachgoers from crossing. Despite the tape, bystanders were observed walking through the water and sitting near the shoreline as if the oil spill hadn’t occurred.

Taylor Griffith, a photographer from Alhambra, California, spent three days on the coast of Huntington Beach and on the border of the Newport Beach River Jetties, where the beach reopened, capturing the progression of the oil spill.

“Sunday I was here, and I went home and my feet were completely covered with black tar,” Griffith told The Epoch Times. “It was really bad, especially right here. The tide had gone out, and there was a group of fish that were stuck in one of these puddles here.”

Griffith turned on the television that night to see images of dead fish from the exact same puddle of water he observed earlier in the day.

While observing the coast on Oct. 3, Griffith noticed tar tracing along the shoreline where it would usually be wet sand.

“When I came back up here on Monday, I had noticed a significant improvement in the amount of oil that was gone,” Griffith said. “There are still some tar balls here and there, but it was really heavily reduced.”

In the distance, Griffith pointed toward the twin oil rigs offshore, Ellen and Elly, with Eureka sitting further away.

In June 2021, Griffith dove off the two rigs to create hydrophone recordings and underwater video and still images for his master’s thesis.

“The subsea structure of the rigs is really encrusted with life,” he said. “So they aren’t this sterile piece. There are thousands and thousands of griddle stars, scallops, and mussels. They’re really generative productive ecosystems.”

As Griffith reflected on the marine life he had witnessed from down below, he anguished over the sea creatures that would be significantly impacted by the spill.

“These are going to be lasting ramifications of what happened here,” he said. “There’s all the small living organisms that really affect that bottom base layer of the food chain. We’re going to see the long-term effects sort of balloon out from there.”

To avoid the oil from leaking past the ocean, crews began building berms at the mouth of the Santa Ana River in between Newport Beach and Huntington Beach, just in time for the unexpected storm on the night of Oct. 5.

While the beach earlier that afternoon showed scarcely a trace of oil, the Santa Ana River mouth contained patches of oil with fish continuing to swim through the contaminated water.

Truckloads of cleanup crews and materials were observed along the coast and the Huntington Beach Wetlands center while some workers secured themselves in hazmat suits.

A bike rider roamed the boardwalk on the sunshine-filled day, unaware of the spill, questioning the noise brought about by the cleanup crews. Another was devastated by the threat to the city’s livelihood when the news broke on Oct. 2.

“When I saw the spills, it was awful,” the Huntington Beach resident told The Epoch Times. “I started to cry. I told myself I hoped it wasn’t true.”

The oil spill off the coast of Huntington Beach that occurred on the evening of Oct. 2 resulted in the cancellation of the last day of the Pacific Airshow.