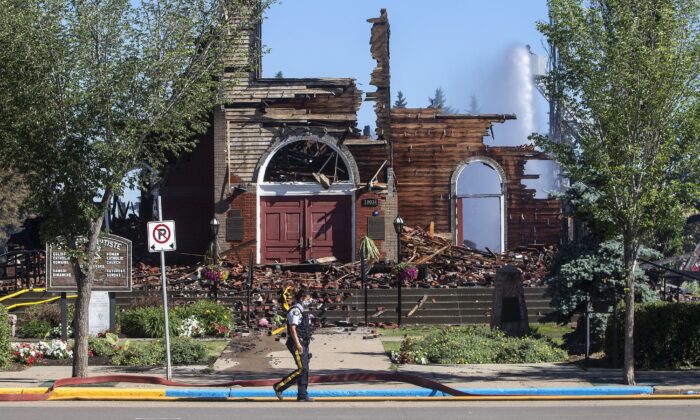 A police officer walks past what’s left of St. Jean Baptiste Parish Catholic church in Morinville, Alta., after it was burned down on June 30, 2021. (The Canadian Press/Jason Franso)
Viewpoints

Burning a Roman Catholic church, or any church for that matter, is a hateful, criminal act.

Nothing can excuse it. Nothing.

I’m an indigenous Métis man. In The Pas, Manitoba, across the Saskatchewan River from the Opaskwayak Cree Nation territory, I took part in several sweat lodge ceremonies. I attended pow wows, wrote about the brutal rape and murder of Helen Betty Osborne, a young Cree woman, and reported on the Aboriginal Justice Inquiry (1988–1991). In the badlands of South Dakota, I sat alone at night during my vision quest.

Since then, I’ve returned to the Catholic church.

The recent attacks on Roman Catholic churches in Canada horrify me. But perhaps more than the actual burning of churches, it is the rationalizations on social media that are the most frightening of all.

Activists in First Nations communities are trying hard to convince everyone that these hate crimes are somehow justifiable or understandable in light of the abuses of indigenous children in the residential school system.

They’re wrong. Nothing justifies hate crimes in Canada. But the lie that residential school abuses of the past somehow make acting out in hatred OK is catching on.

Well-intentioned people are being deceived by this lie.

On Twitter, one user triggered several anti-Catholic tweets when she admitted on the eve of Canada Day that she was having a tough time mustering up sympathy for Catholic churches.

Many Twitter users were only too happy to agree that the Catholic church somehow deserves to be attacked by arsonists, its sacred buildings burnt to the ground.

“I have no sympathy for the church,” replied a user. “Time for reckoning. Long overdue.”

Another said she would not go so far as to support the burning of Catholic churches but said she understands it.

“I also do not understand any indigenous person who would remain a Catholic at this point in time,” she tweeted. “It is not part of their heritage, why would they stick with it?”

I stand by my Roman Catholic faith because I believe in Jesus Christ. I believe He is my Saviour, the Second Person of the Trinity, and that He died and was resurrected for my sins and those of all of us. That Truth is something I consider to be the most important thing in the world.

Many disagree. That’s OK. In Canada, people are free to believe in anything they want, or in nothing at all.

No one, though, is free to destroy church buildings out of anger and hatred. Those are crimes, and anyone guilty of doing that should be prosecuted to the fullest extent of the law.

Decades ago, a more paternalistic Canadian government took the misguided step of setting up residential schools, basing them on the European boarding school model, in concert with Christian churches. When schools became mandatory for all children, indigenous parents who didn’t have access to day schools were effectively forced to give up their young children every autumn for the entire school year.

Many politicians probably believed at the time that this policy would be best for indigenous children, enabling them to integrate into the mainstream society and get jobs and better their lives. There were few schools on reserves.

The unmarked graves discovered in the past few weeks speak volumes of the pain and suffering of the children who died in residential schools.

The Truth and Reconciliation Commission report found that the number one reason for the children’s deaths was disease, including tuberculosis. But what role additional factors played, such as neglect by the Canadian government and other guardians in their duty of care, or abuse by clergy or school administrators, we may never know.

There was racism. There was abuse. That much is certain.

It’s also unfortunately true that there are those with an agenda who will take advantage of the situation for personal gain.

But that posturing and the lies being spouted to manipulate Canadians should not make us lose sight of a very important reality: Canada is a much different place today from the way it was all those years ago.

This is now the most welcoming country in the world toward immigrants from all ethnic groups, races, and religions, according to a September 2020 Gallup poll. Systemic racism is a thing of the past.

Today, Canada’s First Nations and other Canadians stand together.

Together we must denounce these hate crimes, this burning of Catholic churches, and return to fair, reasonable, and calm dialogue on the challenges and issues left to tackle.

As Audrey Poitras, president of the Métis Nation of Alberta, said after the St. Jean Baptiste Parish in Morinville was burned to the ground: “Violence and destruction are not the way forward during these difficult times.”

James Risdon is an award-winning journalist based in Bathurst, New Brunswick.