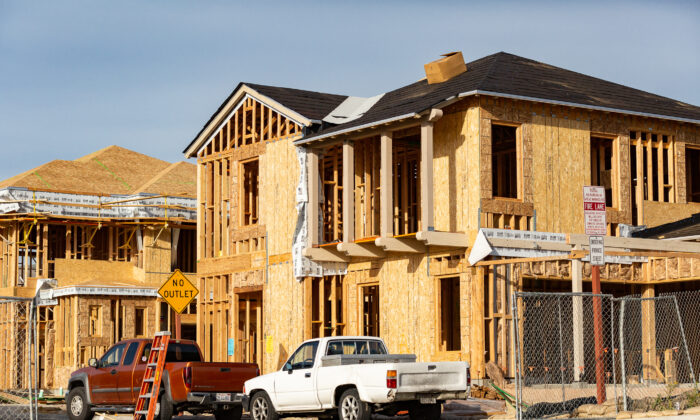 U.S. residential construction spending rose in July, though at a slower pace than in the prior month, as booming demand and rising prices have continued to buoy the housing market.

The Commerce Department said in a Sept. 1 report (pdf) that U.S. residential construction spending rose by 0.5 percent in July, after advancing by 0.8 percent in June.

“Homebuilders have been racing to catch up with demand but have been bogged down by shortages of key raw materials and labor,” Wells Fargo analysts wrote in an analytical note (pdf).

Much of the strength in the Commerce Department’s report came from single-family home construction outlays, which advanced by nearly 0.9 percent over the month in July. While a solid showing, the pace of growth was slower than in the May–June period, when single-family home construction spending advanced by 2 percent over the month.

“The strength in single-family spending and some upward revisions to all three residential construction categories suggest that residential investment did not fall as much as previously thought and might lead to a small upward revision to Q2 real GDP growth,” the Wells Fargo analysts wrote.

The U.S. economy grew a little faster in the second quarter of this year than previously estimated, with the Commerce Department lifting its growth-rate projection to 6.6 percent last week. But recovery momentum appears to have slowed early in the third quarter amid a resurgence of new COVID-19 infections driven by the Delta variant of the CCP (Chinese Communist Party) virus.

“This is a speed bump due to the interaction of Delta and supply-side constraints,” Michelle Meyer, chief U.S. economist at Bank of America Securities in New York, told Reuters. “We still believe the foundation for the economy is solid and all signs point to strong underlying demand.”

The Commerce Department’s construction spending report also shows that multifamily residential construction outlays ticked down slightly in July, falling by 0.05 percent from June, after retreating by 0.35 percent in May.

“Demand for apartments has been surprisingly strong, with rents surging in rapidly growing parts of the South and Southwest. Rents have risen faster than income, leading to a shortage of affordable apartments for workers earning the median income in many areas,” the Wells Fargo analysts wrote.

In the 12 months through July, residential construction spending rose by 25.3 percent, led by outlays on new single-family homes, which vaulted by 38.3 percent.

Overall construction spending, which includes both private and public, residential and nonresidential, rose by 0.3 percent in July, slightly beating the consensus forecast of 0.2 percent.

U.S. single-family home prices in 20 key urban markets rose by 19.1 percent in June from a year earlier, marking the largest annual price increase in the 20-year history of the 20-city composite measure, according to the S&P CoreLogic Case-Shiller home price index (pdf), released on Aug. 31.

“June 2021 is the third consecutive month in which the growth rate of housing prices set a record,” Craig Lazzara, managing director and global head of index investment strategy at S&P Dow Jones Indices, said in a statement. “The last several months have been extraordinary not only in the level of price gains, but in the consistency of gains across the country.”