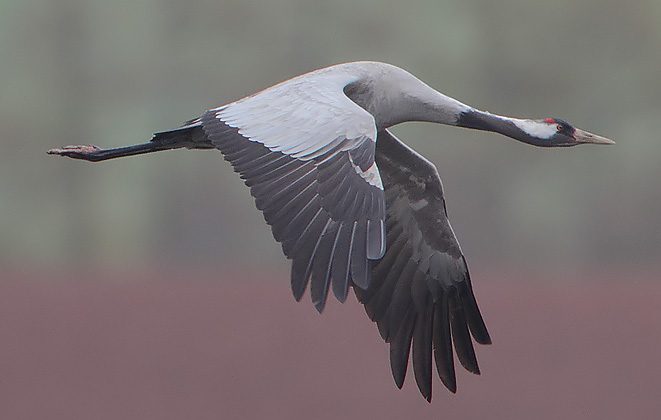 Eurasian cranes, also known as common cranes, are one of the species that has benefited from a new disease risk assessment method to help with the reintroduction of animals to the UK. (Steve Garvie/Wikimedia Commons)
Science

Conservation efforts focused on reintroducing wild animals and birds to the UK can be fraught with problems – not least the threat of disease to both the native and transported populations.

Researchers at the Zoological Society of London (ZSL) have tackled this problem by developing a new method for analysing the risk of disease outbreaks at every stage in the process.

Moving wild animals, known as translocation, is likely to become more common to conserve wild populations that are under threat from habitat loss caused by human factors and climate change.

In the past, introduction of non-native species has had a catastrophic effect on native wildlife. The classic example is the introduction in the late 19th century of the North American grey squirrel, and with it disease that decimated the British red squirrel populations.

To investigate the likelihood of disease outbreaks occurring when animals are moved for conservation reasons, the ZSL researchers adapted the disease-risk analysis method applied in the movement of domestic animals. This kind of risk analysis is similar to that used to estimate risks to people from sources such as car accidents or radioactivity.

Potential translocation hazards include parasites carried by the translocating animals and present in the destination population, which might bring both populations into contact with diseases they did not have immunity for. The stress of capture or transport might also affect the health of the animals.

To test their method, the researchers assessed the risks of translocating wild Eurasian cranes (Grus grus) from Germany to England as part of The Great Crane Project run by the Wildfowl & Wetlands Trust (WWT), Royal Society for the Protection of Birds, and Pensthorpe Conservation Trust. Cranes were widespread in Britain up until about 400 years ago when the draining of their wetland habitats, and hunting and egg collecting resulted in their eventual extinction.

A small wild crane population re-established itself in the Norfolk Broads in the 1980s; nesting cranes can also be seen in the East Anglian Fens. Now the Great Crane Project is trying to introduce a stable population to the Somerset Levels from wild populations in Germany.

After analysing the parasites harboured by the source population of cranes in Germany, captive cranes held in the UK, and the existing small population of UK cranes, the ZSL team identified 24 potential hazards.

The hazards were then ranked using their risk assessment method to determine if they posed a threat. One high-risk hazard identified was the parasite coccidian, and five medium-risk hazards included avian flu virus, parasitic nematode worms, and a bacteria and fungus.

Study lead author Tony Sainsbury said in a statement: “The fundamental difficulties in analysing the risk of disease associated with translocation of wild animals are that knowledge of the number, identity and distribution of parasites and their ability to induce disease is limited and requires further research. In the meantime post-release health monitoring remains very important.”

The results of the analysis, published online in the journal Conservation Biology this week, have been used to guide The Great Crane Project, which has so far reintroduced about 40 birds to the Somerset wetlands since 2010, according to the project’s website.

Each spring, eggs are collected from wild birds’ nests in Germany and transported to the WWT Slimbridge Wetland Centre. After the chicks hatch, they attend “crane school”, where they are taught how to look after themselves by their dedicated human teachers. They are transported to Somerset and released into the wild at about five months old. This year’s chicks have just started to hatch.

“This project has demonstrated that we have a feasible method to assess the risks of disease to translocations before they take place, which is very important if we are to avoid a catastrophe like that which has virtually wiped out the red squirrel in the UK,” Sainsbury said.

The new method is already being applied to the Natural England Species Recovery Programme.