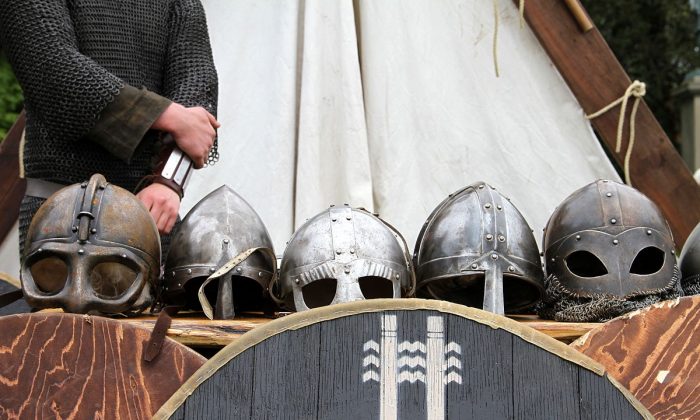 Scientists assumed a few things about a Viking skeleton they excavated in the 1800s.

The skeleton was buried with two horses, an ax, a sword, a spear, a battle knife, and shields, so they assumed the skeleton belonged to a warrior.

A board game lay in the skeleton’s lap, so they assumed the man was a powerful military leader.

Except it wasn’t a man.

The skeleton actually belongs to a woman, according to results of a DNA test published in the American Journal of Physical Anthropology.

“It’s actually a woman, somewhere over the age of 30 and fairly tall, too, measuring around 5 feet 6 inches tall,” Charlotte Hedenstierna-Jonson, an archaeologist at Uppsala University told The Local.

The woman warrior was buried in the mid-10th century in the Viking town of Birka. The gaming set found on her lap was complete with a full set of pieces.

“The gaming set indicates that she was an officer,” Hedenstierna-Jonson said. “Someone who worked with tactics and strategy and could lead troops in battle.”

Scientists have long assumed that the skeleton belonged to man because it was buried with weapons. Several years ago, Anna Kjellström, a bone and skeleton scientist, noted that the cheekbones were narrow and the pelvic bones were feminine. Scientists tested the DNA and the results proved a century-old assumption wrong.

“Using ancient DNA for sex identification is useful when working with children for example, but can also help to resolve controversial cases such as this one,” said Maja Krzewinska, an archaeologist at the Stockholm University.

The discovery of a female warrior is the first of its kind, according to Neil Price, a professor of archaeology at Uppsala University.

Vikings were adept sailors. They raided and traded with countries in north, central and eastern Europe from the late 8th to the late 11th centuries.

A Viking sword made over a millennium ago was found on a mountain in excellent condition.

The sword was found by Einar Ambakk, a reindeer hunter on a remote mountain in Norway, Fox News reported. The finder notified the Glacier Archaeology Program of the local Oppland County Council.

“It is a common type of Viking sword – what makes it special is the context and the preservation: It was found at 1640 m [5381 feet] above sea level,” said Lars Pilo, from the Oppland County Council, to Fox News by email. “To my knowledge, a Viking sword has never been found at such a high altitude before.”

Pilo said the sword laid in that spot for 1,100 years. He indicated the sword’s remarkable preservation could be due to the high altitude.

“That a sword should survive more than a thousand years in the open is hard for some people to believe,” said Pilo.

The sword’s great condition was helped along by the dry mountain conditions. The sword was found in small, loose stones, rather than buried in stone, also helping to keep it from deteriorating.

The council is still speculating on how the sword got to the mountain. “There were no other associated finds nearby. There are no indication[s] of a burial or that it is some kind of sacrifice. It also appears unlikely that the sword was simply lost here, i.e. left behind for some reason and not recovered later. What kind of Viking would have left his most precious object behind?” the council reported via their Secrets of the Ice website.