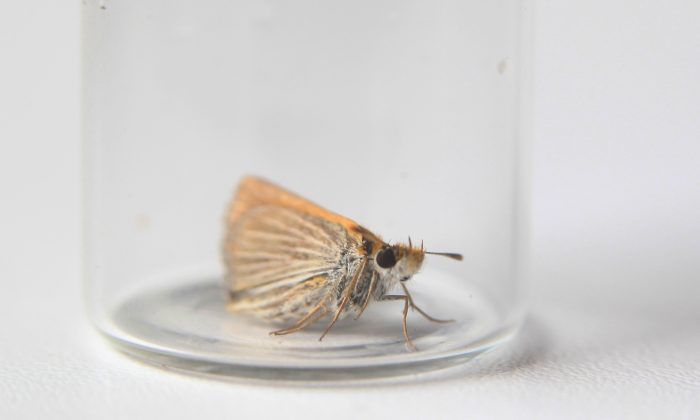 Only 200 Poweshiek skipperling butterflies remain in Canada. Researchers from Canada and the U.S. are meeting in Manitoba this week to try and find out why the insects are disappearing so rapidly. (Mike Dembeck/Nature Conservancy of Canada)
Canada

Only 200 Poweshiek skipperlings remain in Canada
By Justina Reichel

Researchers from Canada and the U.S. are banding together in an effort to save a small butterfly that’s endangered globally, but particularly in Canada’s Prairie provinces.

Less than 200 of the Poweshiek skipperling butterflies remain in Canada, and researchers are scrambling to find out why the small brown and orange insects are dying off so quickly.

The Poweshiek skipperling population has dropped dramatically throughout North America in recent years. It was listed as an “endangered species” in Manitoba in 2012, and is listed as “threatened” nationally.

In Canada, the butterfly mainly inhabits fields in southeastern Manitoba, primarily on land owned by the Nature Conservancy of Canada. In the United States, it appears in only a handful of sites in Iowa and North Dakota.

“This endangered butterfly is facing the real and immediate threat of global extinction, not only in Manitoba but across its entire range,” said Erik Runquist, a butterfly conservation biologist at the Minnesota Zoo.

Researchers from the University of Winnipeg, Minnesota Zoo, and University of Michigan are currently performing research on the declining species near Winnipeg. Since the adult butterfly is active for only two to three weeks in the summer, this is a critical time to collect information on the Poweshiek skipperling’s genetics and genetic diversity in order to help save the butterfly from extinction.

The Minnesota Zoo is also partnering internationally to establish emergency conservation breeding populations at the zoo to combat future losses in the wild.

Runquist says the declining population is a sign that the butterfly’s ecosystem—the tallgrass prairie—is at risk. Once occupying 6,000 square kilometres of south central Manitoba, less than 1 percent of tallgrass habitat remains today. An estimated 1,000 plant and animal species are ecologically tied to the unique ecosystem, including some endangered species.

“Butterflies are sensitive to environmental change and serve as ‘canary in the coalmine’ indicators of prairie health,” says Runquist.

“Poweshiek skipperlings are not the only prairie butterfly in steep decline, and immediate action and cooperation is needed to secure their futures.”

The butterfly is more rare than high-profile endangered species such as the panda and under a more severe threat of extinction, says Cary Hamel, conservation science manager with the Nature Conservancy of Canada in Manitoba.

“If we don’t figure out why the population is declining so quickly and why the butterfly is dying off, we’ll have lost another important species that used to live in the tallgrass prairie,” Hamel says.

“The cross-border collaboration with researchers will hopefully save this species from further decline or extinction.”