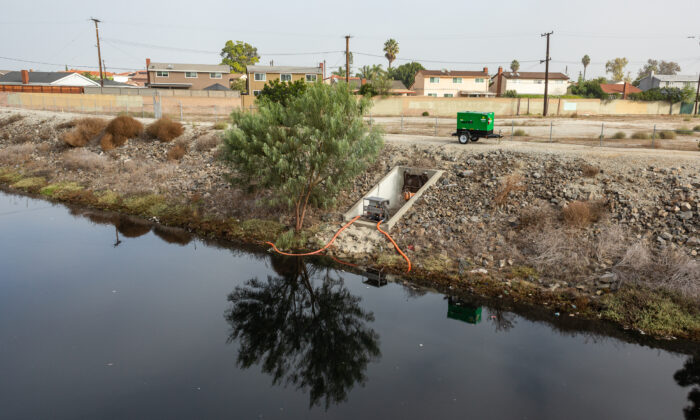 With mounting reports warning the earth’s water supply is being tainted with hazardous human-made “forever chemicals”—known as PFAS–University of California—chemists at Los Angeles (UCLA) and Northwestern University in Illinois have found a cheap, effective solution to an issue that may pose a global threat to human health.

PFAS, or per-and polyfluoroalkyl substances, are chemicals able to last thousands of years and are known to be “extremely difficult” to eradicate. They are found in nearly the entire earth’s water supply, rendering even rainwater unsafe to drink, according to an Aug. 18 statement from UCLA. The chemical has also been linked to cancer and other diseases, the school states.

Research by the Centers for Disease Control and Prevention shows many common products contain traces of PFAS, including fast food containers and wrappers, cleaning products, personal care products such as floss, shampoo, and makeup, and much more.

When these chemicals leach into the environment through manufacturing or everyday product use, they become part of the Earth’s water cycle. As a result, PFAS have contaminated virtually every drop of water on the planet over the past 70 years, while their strong carbon-fluorine bond allows them to pass through most water treatment systems completely unharmed, according to the researchers.

Amid growing concern over its environmental and groundwater PFAS impacts, 3M, which utilizes PFAS in its products, has invested over $200 million globally toward PFAS “remediation,” according to its website. Such efforts include containment measures—such as flexible liners made from materials like engineered clay—to protect PFAS from permeating surrounding groundwater at their manufacturing and disposal sites.

But chemists at the UCLA and Northwestern in Illinois have developed a “simple” way to break down almost a dozen types of these “nearly indestructible” chemicals at relatively low temperatures, with no harmful byproducts.

This is done by heating the PFAS in water to between 176 and 248 degrees Fahrenheit with common, inexpensive solvents—dimethyl sulfoxide, also known as DMSO, and sodium hydroxide, or lye.

This leads molecules within the PFAS to fall off, leaving only fluoride, carbon dioxide, and formic acid as byproducts in the water solution.

Fluoride is an additive often found in toothpaste to prevent tooth decay, while carbon dioxide and formic acid are considered “not harmful,” according to Dichtel and Trang.

This process is said to sever some of the strongest molecular bonds in PFAS while also initiating a chemical reaction that “gradually nibbles away” at the molecule until it is gone, according to UCLA distinguished research professor and co-corresponding author Kendall Houk.

Though proven to be a “very complex” set of calculations that “challenged the most modern quantum mechanical methods and fastest computers available to us,” according to Houk, simulations predicting the efficacy of these experiments has led to major strides in PFAS research.

Researchers believe their method will work for most PFAS that contain certain acids and hope it will help identify weak spots in other classes of PFAS. Moving forward, they hope these encouraging results will lead to further research that tests methods for eradicating the thousands of other types of PFAS.

The technology, along with comparatively low temperatures and lack of harmful byproducts from the process, means there is “no limit” to how much water can be processed at once, Houk said. Furthermore, the technology could eventually make it easier for water treatment plants to remove PFAS from drinking water.