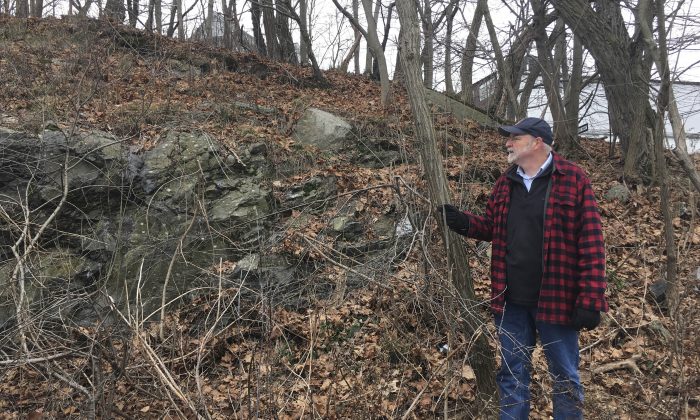 Salem State University history professor Emerson Baker stands in an area Friday, Jan. 15, 2016, that he and a team of researchers said is the exact site where 19 innocent people were hanged during the 1692 witch trials in Salem, Mass. Salem Mayor Kim Driscoll said the city plans to put a tasteful memorial at the site, which is known as Proctor's Ledge and is surrounded by private homes. (AP Photo/Rodrique Ngowi)
archaeology

SALEM, Mass.—A team of researchers using historical documents and 21st-century archaeological techniques has confirmed the site where 19 innocent people were hanged during the Salem witch trials more than three centuries ago.

The site, known as Proctor’s Ledge, is a small city-owned plot of woods nestled between two residential streets and behind a Walgreens pharmacy, said Salem State University history professor Emerson “Tad” Baker, a member of the seven-person team, which announced its findings this week.

Historian Sidney Perley had pinpointed Proctor’s Ledge nearly a century ago as the site of the hangings by using historical documents, but his findings were lost to time, and myth, misconceptions and conspiracy theories had taken their place, Baker said.

The current research, known as the Gallows Hill Project, was about correcting the misinformation many people have about this episode in American history.

“We are not discovering anything, and we don’t want to take credit for that,” he said. “This is all about the healing, not about the discovery.”

Twenty people suspected of witchcraft were killed in Salem in 1692 during a frenzy stoked by fear of disease and strangers, and petty jealousies. Nineteen were hanged, and one man was crushed to death by rocks.

The top of nearby Gallows Hill had long been thought of as the site of the hangings, but there was no evidence to support that, Baker said. Proctor’s Ledge is at the base of Gallows Hill.

To determine the spot, the team looked at eyewitness accounts of the hangings, then used modern-day aerial photography and ground penetrating radar not available a century ago.

The team made other interesting discoveries. They determined there probably never was a gallows at the site. More than likely, the executioners tossed a rope over a large tree.

Baker also stressed that there is no evidence that any of the victims were buried at Proctor’s Ledge — it’s too rocky and the soil is too shallow.

“I think knowing the exact location where the executions took place is important because we want to get history right,” Mayor Kim Driscoll said. “It’s also an opportunity to come together and recognize the injustice and tragedy.”

The city plans to place a marker at the site but also wants to respect the rights of the people who live in the area, the mayor said. The city doesn’t want visitors tramping through private backyards looking for the spot, she said.

Instead, she encourages visitors to go to the memorial and museum downtown.

Baker said a memorial at the site is important.

“We need to have that exact spot marked so it can never be lost again,” he said.