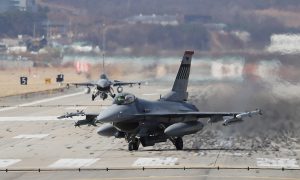 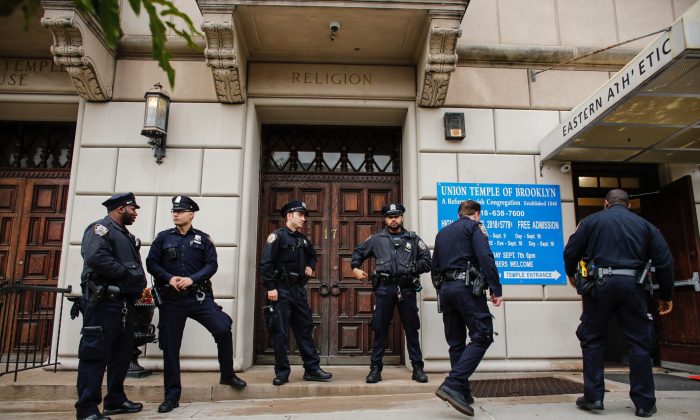 NYPD officers stand guard at the door of the Union Temple of Brooklyn in New York on Nov. 2, 2018. Police determined that anti-Semitic graffiti found inside a Brooklyn synagogue was scrawled by a former city council intern. (Kena Betancur/AFP/Getty Images)
US News

A Kentucky researcher doubts reports of a growing hate-crime problem in the United States in recent years, arguing that the increase in hate-crime reports in 2017 can mostly be explained away as hoaxed crimes and erroneously interpreted data.

Hate crimes increased by some 17.2 percent between 2016 and 2017, according to the latest FBI data. But Wilfred Reilly, assistant professor at Kentucky State University, says the increase was mainly caused by the fact that about 1,000 more law enforcement agencies reported data to the FBI in 2017.

“To be responsible for the entire surge, each agency [of the 1,000] would have to report exactly one hate crime,” he pointed out via email. “I believe with reason—given the average agency has reported between 0.44 and 0.63 hate crimes annually in recent years, and that high-crime agencies are more likely to withhold data from the FBI in the first place—that almost all of the surge is due to this technical change in reporting rates.”

Publicly available data isn’t detailed enough to determine if Reilly is right. He’s asked the FBI to provide him with the more complete data set.

There are ways, however, to put the available data into perspective.

Another major caveat is that hate crime reports are very rare. The rate in 2017 stood at less than 2.4 incidents per 100,000 residents covered by the data. The murder rate that year was 5.3 per 100,000, making homicide more than twice as likely to occur than a hate crime incident reported. Meanwhile, the majority of hate crimes, such as intimidation and vandalism, are non-violent.

Another factor that pushes up the number is fakes, Reilly argues. He has collected a list of over 600 incidents reported in media that he believes qualify as hate-crime hoaxes. Some 300 of them were reported in the last five years with more than a hundred concentrated in 2017.

He acknowledges that some of the incidents on his list likely weren’t reported as hate crimes and there are also some that have not been definitively proven as hoaxes. He estimates about 90 percent of the incidents were definite hoaxes pursued as crimes.

The most common hoaxes appear to be black, Hispanic, homosexual, and Muslim people terrorizing themselves with inflammatory graffiti, messages, and threats, unnerving their communities in the process.

More serious accusations included made up stories of black men being brutally beaten by supporters of President Donald Trump. The included photos actually came from unrelated incidents years prior.

More than 50 incidents on Reilly’s hoax list involved accusations against Trump supporters, including the most recent case of actor Jussie Smollett, who is being sued by the City of Chicago for the exorbitant cost of investigating a hate crime law enforcement says never occurred.

Several arson incidents included a Mosque, an LGBT center, and a Jewish-owned business, where police eventually determined that an individual connected to the place itself started the fire.

There were also several incidents where white people hoaxed attacks by minorities. A man in Colorado claimed he was stabbed for having a “Nazi haircut,” while, in fact, he cut himself. A security guard in Minnesota claimed he was shot by a black man, while in fact he accidentally shot himself while handling his gun. In this case, the fake story didn’t depict a hate crime. The man made it up reportedly because he was afraid the accident might cost him his job. Similarly, two hunters in Texas blamed an “illegal immigrant” for what was actually a friendly fire incident.

Reilly, whose specialization is in the political sciences and criminal justice, estimates that only about 8 to 10 percent of the 7,175 hate-crime incidents reported in 2017 came under the media spotlight. Thus, based on his numbers, about 14 to 17 percent of hate crimes reported in the media in 2017 were likely hoaxes.

It would be, however, a conservative estimate, he cautions, to say that 14 to 17 percent of all reported hate crimes that year were fake. It appears that only a small share of hate crimes reach the point where a suspect is found, charged, and convicted, leaving the likelihood that some of the unsolved cases were hoaxed too.

Hate crimes are more difficult to investigate or even establish for law enforcement. For one thing, they require determining the offender’s state of mind. Just because the victim and the offender are of different race or creed doesn’t mean a hate crime occurred. Bias has to be part of the motivation.

Another problem is that most of them are based on lesser offenses. Only about 14 percent of the reported incidents in 2017 involved serious crimes of aggravated assault, rape, robbery, arson, or murder. In fact, one was about as likely that year to be killed by lightning as to be murdered in a reported hate crime. And 2017 had record low lightning deaths.

Of the nearly 1,100 hate crimes reported in California in 2017, only 35 percent were referred for prosecution, less than 18 percent saw hate crimes charges filed, and less than 6 percent ended up in a conviction (pdf).

If California is any indication for conviction rates nationwide, Reilly says, there are around two hate hoaxers for every convicted hate criminal.

“Many cases could indeed be ambiguous—did a hoaxer or Klansman write the collegiate graffiti—but the fact that proven hoaxes may outnumber convictions is fairly remarkable as a legal artifact,” he said.

Reilly summarized his research on this topic in his book “Hate Crime Hoax: How the Left is Selling a Fake Race War,” which was published in February.