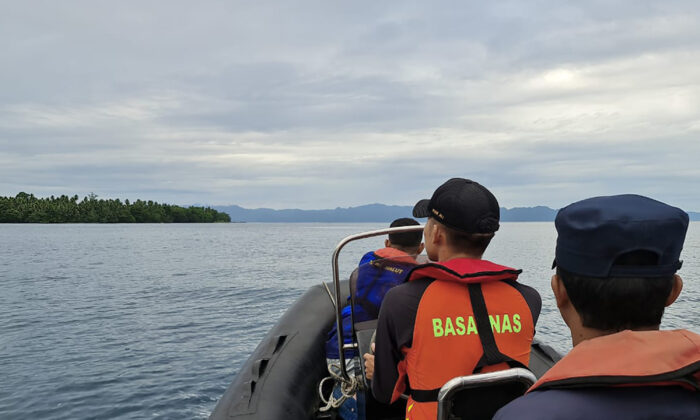 Rescuers on a rubber boat scans the horizon as they search survivors after a passenger boat KM Cahaya Arafah sank in the waters off South Halmahera district in North Maluku, Indonesia, on July 19, 2022. (BASARNAS via AP)
Asia & Pacific

Rescuers Search for 13 After Boat Sinks in Indonesian Waters

JAKARTA, Indonesia—Rescuers were searching on Tuesday for 13 passengers from a boat that sank in bad weather and high waves while traveling between Indonesian islands.

Sixty-four survivors have been found, said Fathur Rahman, head of the local search and rescue agency. They were able to swim to the coast to survive.

Rubber boats, speedboats and a local longboat were being used in the search for the others.

The KM Cahaya Arafah had left the seaport on Ternate Island on Monday morning and was heading to West Gane subdistrict in South Halmahera district.

Ferry and boat tragedies are common in Indonesia, an archipelago of more than 17,000 islands, where ferries are often used as transport and safety regulations can lapse.

In 2018, an overcrowded ferry with about 200 people on board sank in a deep volcanic crater lake in North Sumatra province, killing 167 people.

In one of the country’s worst recorded disasters, an overcrowded passenger ship sank in February 1999 with 332 people aboard. There were only 20 survivors.