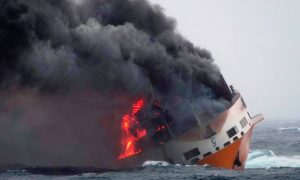 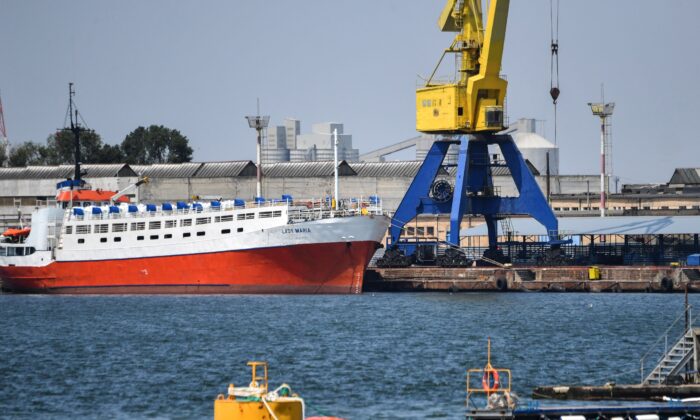 Romania's Midia port on the Black Sea before it embarks its passengers: thousands of sheep to be shipped to Libya for the Eid al-Adha holiday on July 30, 2019. (Daniel Mihailescu/AFP via Getty Images)
Europe

Rescuers Scramble to Save 14,600 Sheep After Cargo Ship Capsizes in Black Sea

Emergency services are racing to save 14,600 sheep after a cargo ship they were being carried on capsized in the Black Sea, off the coast of Romania.

The Queen Hind cargo ship, which was built as a livestock carrier in 1980, overturned on Nov. 24, shortly after departing at about 12 p.m. from the Romanian port of Midia—one of the satellite ports of Constanța county, which borders Bulgaria.

The Palau-flagged cargo ship had been bound for the port city of Jeddah in Saudi Arabia, reported the BBC. It is still unclear why the vessel capsized. However, authorities said an investigation will be carried out after rescue efforts cease.

Ana-Maria Stoica, a spokeswoman for the emergency services in Constanța, told AFP all crew members, including 20 Syrians and one Lebanese national, were rescued.

Of the more than 14,000 sheep which were on board Queen Hind, 32 have been rescued so far in an operation involving the Romanian coast guard, divers, military, police, and firefighters. Many are believed to have drowned.

“The rescue operation is ongoing … We hope that the sheep inside the ship’s hold are still alive,” Stoica said.

She told the BBC: “We have already saved a small number. They were swimming in the sea.”

The rescue operation has been paused temporarily overnight and will resume on Monday morning, according to the outlet.

The spokeswoman said one crew member was rushed to hospital with hypothermia after falling into the sea, but the rest were “all safe here in the harbor.”

Photos circulating on social media show the 278-foot long cargo ship on its side a few hundred yards from the port of Midia.

Rescuers will, on Monday, continue with their efforts to pull the ship to the port.

Romania, the EU’s third-largest sheep breeder after Britain and Spain, is a top exporter, primarily to Middle Eastern markets. The port of Midia is frequently used by cargo ships to transport livestock from the region, with about 100 departures in total annually.

According to Vessel Finder, the Queen Hind cargo ship has a gross tonnage of 3,785. However, Gabriel Paun of NGO Animals International told AFP he believes the vessel had been overloaded, as he called for an investigation. He alleged Queen Hind had problems with its engines as far back as December 2018.

Mary Pana, president of Romania’s leading livestock breeder and exporter association, Acebop, said she is “shocked by the disaster.”