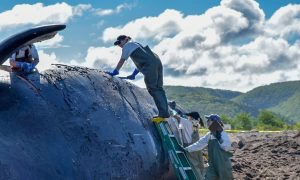 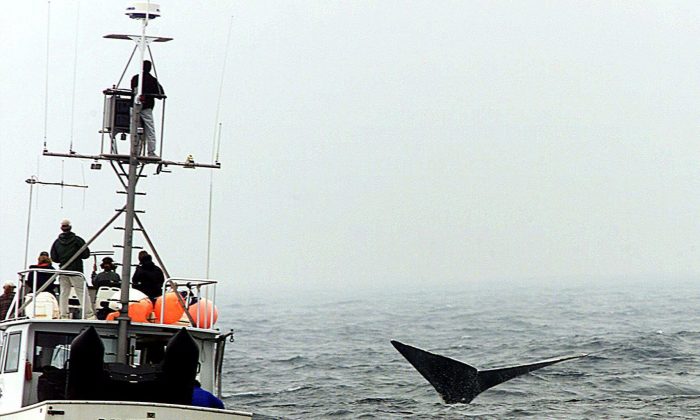 A news release from the Department of Fisheries and Oceans said search and rescue operations for three whales in the Gulf of St. Lawrence resumed on Tuesday after “several days” of challenging weather conditions.

“Two of the three whales were spotted and rescuers worked to disentangle both,” it said.

The whale known as 4423, which had been partially disentangled last Thursday, was spotted again Tuesday morning during an aerial surveillance flight, the department said.

Rescuers were able to make additional cuts to the gear the whale is entangled in, although they weren’t able to completely free the animal, it said.

Later Tuesday, another whale known as 4440 was spotted and rescuers were able to cut away a rope running from its mouth to its tail, although it was not possible to completely remove the gear, the department said.

Thanks to better weather conditions, we are making progress to free #RightWhales EG 4423 and 4400. When weather permits, teams will head out again to check on them and to look for the third entangled whale. @NOAA #Campobello Whale Rescue Team. pic.twitter.com/2t0Z0Sj9f2

That whale was first seen entangled on June 29 off Miscou Island, N.B., and officials said it “appeared to be dragging something heavy.”

The next step for both animals will be for officials to assess, by air, how the entanglement has changed after Tuesday’s work, and rescue efforts will resume when weather permits, the release said.

Joe Gaydos with the SeaDoc Society out of the University of California, Davis, said disentanglement can be a slow process and these whales can drag this type of gear for a long time.

A few extra days delay is prudent to ensure the safety of the crew and to make sure that the cuts made by the disentanglement team really help to remove the gear, he said.

Gretchen Fitzgerald, national programs director for the Sierra Club Canada Foundation, added that rescuers are doing the best they can.

“It’s frustrating for those involved, but the Gulf is a pretty big place and it can be rough at times, and I’m sure that a whale that is entangled is not the easiest animal to deal with,” she said.

In addition to the short-term rescue efforts, Fitzgerald is urging the government to take other steps, including investing additional funds to support the emergency marine mammal response network.

A statement from various organizations including the Sierra Club also called for an emergency response task force, comprised of scientists, researchers, environmental organizations, industry groups, and government decision-makers, to develop solutions and provide ongoing analysis and response to the crisis.

The whales number only about 400 worldwide, and in the last few weeks, six have died in Canadian waters. Necropsies showed that three of those deaths were due to vessel strikes.

Fitzgerald said there were seven babies born this winter in the whales’ southern area of migration, but if the number of deaths is as high as the number of births, the population could be in trouble.

“The level of stress these animals are under…. A lot of them have been entangled or had encounters with vessels in their lifetime—multiple times,” she said.

“The individual animals are suffering, and the population is suffering so much.”