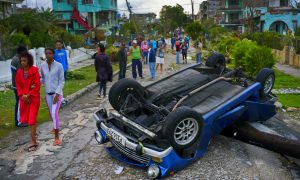 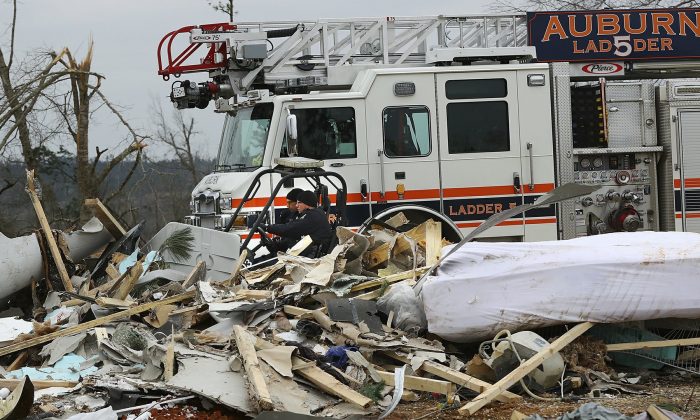 Rescue workers in a four-wheeler pass by the wreckage of a home along Lee Road 38 after a March 3 tornado tore through Beauregard, Ala., on March 4, 2019.(Curtis Compton/Atlanta Journal-Constitution via AP)
US News

Kemp declared a state of emergency on March 4 for three Georgia counties—Grady, Harris, and Talbot—which suffered the worst damage. He told reporters at a news conference that Georgia had “thankfully no fatalities. Most of the injuries are not too bad, so we’re blessed by that.”

Georgia communities were damaged by the same storm system on Sunday that spawned an EF-4 tornado in Lee County, Alabama, killing at least 23 people. Numerous tornado warnings have also been issued in Georgia, Florida and South Carolina.

Kemp said the damage in Georgia is not likely to be severe enough to qualify for federal disaster aid, even though it is too soon to know for sure.

Rescue crews are using dogs and heat-detecting drones to search for victims of a tornado blamed for killing at least 23 people in southeast Alabama.

Lee County Sheriff Jay Jones told a news conference on March 4 that dozens of people are still missing the day after a giant twister hit the rural Beauregard community, leaving a path of destruction nearly a mile wide.

Jones said search crews are “basically using everything” they can get their hands on to comb through wreckage and debris. This includes dogs brought in from across Alabama and neighboring states, as well as drones equipped with “infrared capability to detect heat signatures.”

Jones says the hardest-hit areas have been checked but the searches are far from over.

At a news conference, Ivey said Trump called her around 8:15 a.m. on March 4. She said he told her, “Of course you’ve got my support.” Trump has instructed the Federal Emergency Management Agency to give Alabama the “A Plus treatment.”

Addressing storm victims in one hard-hit county, Ivey said, “I want you to know I’ve got your back. We will do everything in our power to help the citizens of Lee County recover.”

She added, “So to the people of Lee County, please know we are here today to stand with you today, tomorrow and in the weeks ahead. We will stand together and get through this together.”

He said the nation mourns the loss of those who died in a tornado that rampaged through southeast Alabama, killing at least 23 people.

Trump said the country is “sending our love and prayers to the incredible people of Alabama.”

In an earlier Twitter post, President Donald Trump said he asked the Federal Emergency Management Agency to give Alabama the “A Plus treatment” as the state responds to a deadly tornado that killed at least 23 people.

FEMA has been told directly by me to give the A Plus treatment to the Great State of Alabama and the wonderful people who have been so devastated by the tornadoes. @GovernorKayIvey, one of the best in our country, has been so informed. She is working closely with FEMA (and me!).

A coroner says at least three children are among the 23 dead after at least one tornado devastated part of Alabama.

Lee County Coroner Bill Harris said at a news conference the deceased children were aged 6, 9, and 10. Harris didn’t give further details about them.

All but six of the people killed in the storm have been identified, Harris said, and his office will soon begin contacting families about funeral homes and arrangements.

Sheriff Jay Jones said search crews are still checking addresses of people who have been reported missing. He would not provide the exact number of how many are still missing but said “I would say dozens.”

It was the deadliest day of tornadoes in the United States in nearly six years.

A National Weather Service official said the tornado that struck southeastern Alabama was an EF4 twister with wind speeds estimated to be 170 mph (274 kph).

Meteorologist Chris Darden said at the news conference the Sunday storm had a path of nearly 1 mile (1.6 kilometers) wide, and 24 miles (39 kilometers) long, stretching toward Georgia. He said officials on both sides of the state line are surveying the severe storm’s damage.

Darden said it was one of several tornadoes that struck southeastern Alabama. He said one in was Macon County. He also said there also was damage from a separate EF1 storm in Barbour County.

Friends in eastern Alabama are helping tornado survivors retrieve the scattered pieces of their lives after devastating winds destroyed their homes.

In Beauregard, Dax Leandro helped clean up his buddy’s mom’s property. Two structures were obliterated, including the family’s house.

Debris from the home was scattered in surrounding trees. Leandro helped look for anything of value to give back to the family.

He said some who were inside the house ended up “hundreds of yards away” beneath rubble and were still intact.

Authorities warn the death toll may rise as first responders search the area in southeastern Alabama.

Lee County Sheriff Jay Jones told reporters that crews are committed to finding everyone reported missing or possibly trapped in the rubble.

About 150 people hunkered down together in a Baptist church and sang songs as deadly storms moved through the southeast.

The state newspaper quoted staff members of the Red Bank Baptist Church in Lexington County, South Carolina, saying that children sang “Jesus Loves Me” during a regular Sunday night service as storms moved through the central part of the state.

One said the group moved from the sanctuary to a long hall during the storm, which knocked a column down in the front of the building and damaged another.

Derrec Becker with the South Carolina Emergency Management Division said no deaths or serious injuries have been reported in the state due to the storms. About 8,000 homes lost power.