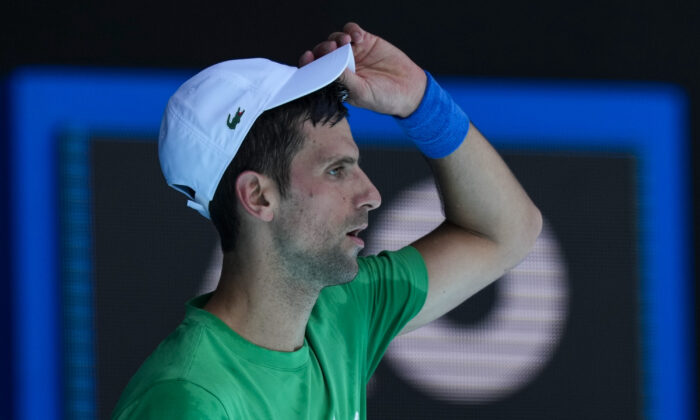 Two men have emerged with their reputations enhanced internationally over Novak Djokovic’s recent visit to Australia.

One is Djokovic himself; the other is Judge Anthony Kelly.

As to Djokovic, arguably the world’s greatest male tennis player, he is clearly a caring and generous man, evidenced both by his personal contributions to and his support for charitable and similar causes.

Like all of us, he is not perfect, holding views that others consider curious or even wrong. But it is nothing as extraordinary as the views of most of the Australian political class who insist that governments can control, with a precision of less than one degree, the temperature of the world decades hence.

This is notwithstanding the fact, evidenced by the recent volcano off Tonga, that we live on a molten fiery ball hurtling through space whose longevity and protection from disaster can only be in the hands of the Almighty.

Djokovic demonstrated his innate nobility in his reaction to the provocative and unlawful treatment he suffered on his entry, to the vicious, vulgar, and gratuitous personal attacks on him by some in politics and the media, and by the graciousness with which he accepted the decision of the full federal court, who made it clear that this was in no way an endorsement of Immigration Minister Alex Hawke’s diktat.

That diktat disgraces and besmirches Hawke’s high constitutional role as one of the “Queen’s Ministers of State” and is far more appropriate to a commissar in some alien dictatorship.

Yet even then, Hawke was forced to effectively concede that Djokovic had indeed entered Australia with a valid medical exemption. He did this by abandoning any reliance on this to cancel the visa.

So the thuggery in holding him on arrival, interrogating him when normal people are asleep, denying him access to lawyers and Tennis Australia, and then putting him into detention was not only unlawful, it was unjustified and was not the behaviour one would expect in a civilised country.

It also demonstrated the sheer incompetence of the authorities. As one of the few politicians daring to dissent from the political class’s line about the virus, Craig Kelly declared that Djokovic had become a political prisoner.

Political indeed. The suspicion remains that the government was intent on acting against Djokovic because of the advice of opinion pollsters, the “evidence” of focus groups and the political advantage this might be in the coming election.

In the meantime, Hawke was also forced to expressly concede that Djokovic was of good character and that he was most unlikely to infect others.

Nevertheless, he determined to use one of the most disgraceful powers ever legislated in Australia, a personal ministerial power to cancel a visa while ignoring the rules of natural justice.

This was on the unbelievable ground that Djokovic could be a role model for those Australians who dare to take a different view than the political class.

And notwithstanding Hawke’s concession that Djokovic’s entry was indeed lawful, on the very morning of the deportation, Prime Minister Scott Morrison still intimated on Sydney Radio Station 2GB that the entry was unlawful and in breach of the rules, even claiming “We have very clear rules as to who can come into this country.”

The rules are as clear as mud, administered incompetently, at times brutally, and contrary to the rules of natural justice—as anyone watching the mess that the government made of Djokovic’s visit can testify.

Surely Morrison was aware of the facts surrounding the case and that the only justification claimed for the deportation his commissar offered was that Djokovic could inspire those who dared dissent from the official line on vaccination for everyone, even children, with vaccines not subjected to the rigorous testing.

There is also the exclusion of recourse to early treatment as proposed by some of the world’s leading scientists, all associated with punitive lockdowns, especially burdening the poor and newer and smaller entrepreneurs but from which the political class has been totally immune.

And as to the other person to emerge with his reputation mightily enhanced, Judge Anthony Kelly was clearly disturbed by the injustice visited upon Djokovic at the time of the first attempted cancellation of his visa.

Pointing out that a “professor and an eminently qualified physician have produced and provided to the applicant a medical exemption … That medical exemption and the basis on which it was given was separately … [verified] by a further independent expert specialist panel established by the Victorian state government. And that document was in the hands of the delegate.”

He asked, “And the point I’m somewhat agitated about is, was what more could this man have done?”

Then there was his reaction to his counsel’s fear that the government lawyer’s gratuitous announcement of Djokovic’s location would lead to a media scrum or indeed riot when he was moved.

That should be compared with the way in which the Victorian judicial system and police had been to subject the innocent Cardinal George Pell to traversing twice every day the hostile gangs outside the court.

Those scenes recalled, for the historically aware, the tumbrils on the way to the guillotine during the reign of terror in France. Yet no one raised a finger to ensure that this did not continue, at the least because of the harmful impact this could have on the jury.

As I mentioned in a previous piece on this question, the government has claimed that the lower death rate in Australia is the result of its extreme measures based on a Beijing style attachment to lockdowns, rather than what it really and simply is, our geography: that is, the fact that Australia is a remote island nation.

The reaction to the Wuhan virus by the Australian political class, created by Beijing with the extraordinary involvement of Dr. Anthony Fauci, has seriously damaged the lives and fortunes of too many Australians.

Meanwhile, the commissar’s diktat has been the greatest blow to the reputation of Australia as one of the world’s oldest continuing democracies under the rule of law.