Republicans Win Back Virginia House of Delegates in Historic Sweep 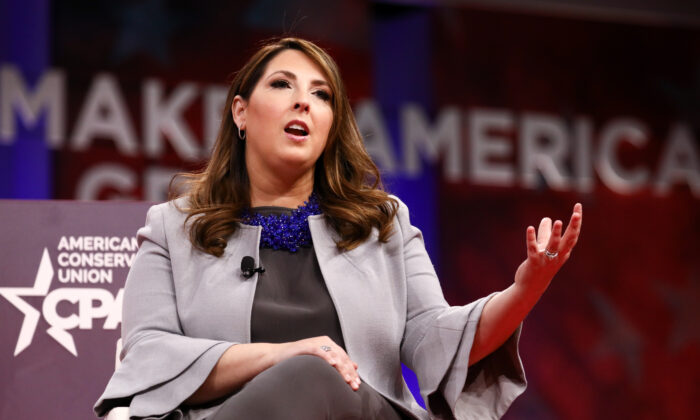 Republican National Committee (RNC) Chairwoman Ronna McDaniel released a statement Wednesday marking historic wins for the GOP in Virginia, including control of the House of Delegates.

“On top of a clean sweep of the three statewide offices in Virginia, Republicans have retaken the House of Delegates in another sound rejection of Biden and Democrats’ failed agenda. The red wave is here, and things are only going to get worse for Joe Biden and the Democrats come November 2022,” McDaniel said in a statement.

“The red wave is here! Congratulations to Republicans Glenn Youngkin, Winsome Sears, and Jason Miyares on their incredible campaigns and hard fought victories,” she wrote.

McDaniel said the sweep sent a clear signal regarding what she called “the failed policies” of President Joe Biden and other Democrats.

“This Republican sweep in Virginia is a resounding rebuke of the failed policies of Joe Biden and the Democrats. Virginians— and Americans across the country—are fed up with Biden’s divisive policies, failed leadership, and a Democrat agenda hurting working families,” McDaniels said.

“A Republican wave is coming in 2022, and Virginia is just the start,” McDaniels added.

The committee’s Twitter account also proclaimed the Virginia victories as a taste of what the 2022 midterms will bring.

“Republicans WON BIG up and down the ballot on Tuesday and will carry this momentum into the 2022 midterms,” the committee said on Twitter Wednesday morning.

“While last night we came up short, I am proud that we spent this campaign fighting for the values we so deeply believe in. We must protect Virginia’s great public schools and invest in our students. We must protect affordable health care coverage, raise the minimum wage faster, and expand paid leave so working families have a fighting shot,” McAuliffe said.

“We must protect voting rights, protect a woman’s right to choose, and, above all else, we must protect our democracy. While there will be setbacks along the way, I am confident that the long term path of Virginia is toward inclusion, openness, and tolerance for all,” he added.

His statement thanked Youngkin, as well as his family and supporters who stood by him through the campaign.

“Congratulations to Governor-Elect Glenn Youngkin on his victory. I hope Virginians will join me in wishing the best to him and his family.

“I would like to thank my wife Dorothy, my family, and my incredible campaign team for their tireless efforts and dedication over these past eleven months. And to all of my supporters across Virginia who knocked on millions of doors, made countless phone calls, and talked to their family, friends, and neighbors: I am eternally grateful that you joined me on this journey to move Virginia forward.

“Serving as Virginia’s 72nd governor was the highest honor of my life, and I will never stop fighting to make our Commonwealth stronger and brighter for all.”