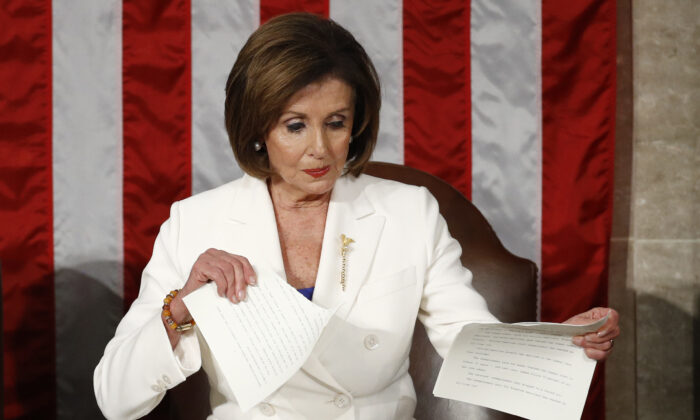 House Speaker Nancy Pelosi (D-Calif.) tears her copy of President Donald Trump's State of the Union address after he delivered it to a joint session of Congress on Capitol Hill in Washington, on Feb. 4, 2020. (Patrick Semansky/AP Photo)
US News

Trump delivered the address in February after an especially contentious period in Congress, coming weeks after the House voted to impeach him. The Senate ultimately did not convict him.

Republican Policy Committee Chairman Gary Palmer (R-Ala.) and Republican Study Committee Chairman Mike Johnson (R-La.) wrote a letter (pdf) to Barr on Tuesday, asking to give an answer whether the speaker “committed a criminal act by destroying an official copy of the State of the Union speech delivered to her.”

“We ask the Attorney General to review this scandalous outburst, not simply because it offended every American, but because it set a precedent for radical politicians to hijack state events for partisan performance art and possibly break the law with, thus far, no consequence,” Palmer wrote.

The lawmakers believe she violated the U.S. Code, which bars the mutilation of official federal records and sets a criminal penalty for destroying documents with up to three years in prison.

Pelosi’s spokesman, in response to the allegation, told Fox News that the claim she violated the law is false. He also noted that the lawmakers listed the wrong date in the letter.

At the time, Douglas Cox, professor of law at the City of New York University School of Law, said that Pelosi’s “copy of the State of the Union address is not a government record or government property at all” and is “personal property.”