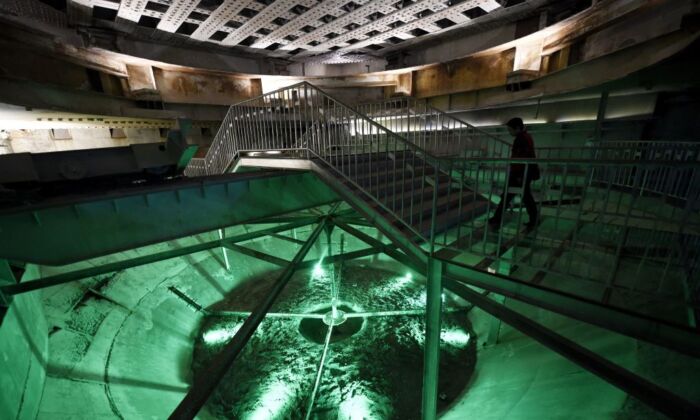 A tourist visits the "816 Nuclear Military Engineering" installation in the mountains of Fuling district, Chongqing, on Feb. 21, 2017. (Wang Zhao/AFP via Getty Images)
Republicans

Three ranking Republican members have urged President Biden to stop China’s nuclear arms expansion, warning that failure to act could lead to “a degree of nuclear parity” between China and the United States by 2030.

In a June 8 joint letter, Reps. Mike Rogers (R-Ala.) of the House Armed Services Committee, Michael McCaul (R-Texas) of the House Foreign Affairs Committee, and Devin Nunes (R-Calif.) of the House Intelligence Committee noted that China’s rapidly developing nuclear forces pose a growing threat and that the Chinese Communist Party (CCP) is unwilling to engage in good-faith arms-race and arms-control negotiations with the United States.

Adm. Charles Richard, head of the U.S. Strategic Command, testified in front of Congress that China has moved some of its nuclear weapons to alert status and that its nuclear stockpile is estimated to double in the next 10 years.

Rogers and others noted that, according to public reports, including data from the Defense Department, the size of China’s nuclear deterrent force could reach roughly 1,000 warheads by 2030.

China has never made public the size of its nuclear stockpile, but only emphasizes its self-defense nuclear strategy and its policy of not being the first to use nuclear weapons at any time or under any circumstances.

Although China is a signatory to the Nonproliferation of Nuclear Weapons Treaty (NPT), Article VI of which requires nuclear-armed states to negotiate in “good faith” on arms reductions, Beijing has refused to engage in bilateral or trilateral nuclear disarmament negotiations with the United States since the Trump administration.

The three lawmakers asked Biden to develop a comprehensive interagency strategy for China to enter into meaningful bilateral or trilateral arms control negotiations to determine whether China is in violation of NPT Article VI.