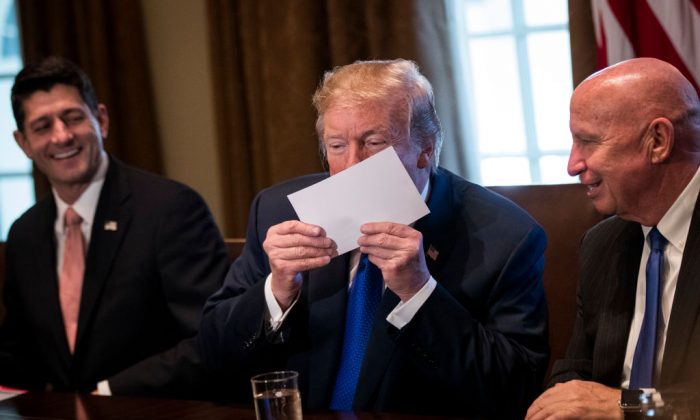 Flanked by Speaker of the House Paul Ryan and House Ways and Means Committee chairman Rep. Kevin Brady (R-TX), President Donald Trump kisses an example of what a new tax form may look like as he speaks about tax reform legislation in the Cabinet Room at the White House in Washington, DC, on Nov. 2, 2017. (Drew Angerer/Getty Images)
Politics

Republicans introduced the much-anticipated tax reform legislation on Nov. 2. If the bill passes both chambers, it will be the first major U.S. tax reform since 1986.

The House Ways and Means Committee introduced the Republican draft of the tax code rewrite. The markup process—the revision and amendment of the bill in committee—is expected to begin on Nov. 6.

According to a summary released, the legislation calls for slashing the corporate tax rate from 35 percent to 20 percent.

The plan, named the Tax Cuts and Jobs Act, leaves the top individual tax rate at 39.6 percent, which will be applied to married couples earning more than $1 million a year.

The new individual tax brackets would be:

35 percent: For incomes up to 500,000 for individuals and $1 million for married couples

The repatriation rate on offshore earnings of U.S. companies will be as high as 12 percent. Illiquid assets would be taxed gradually at a lower rate.

The House is likely to consider the bill the week of Nov. 13, said White House Press Secretary Sarah Sanders on Oct. 30.

“In order to stay on pace, we want to see a House bill passed by Thanksgiving. This is a very aggressive timeline, but one that will help us get tax cuts this year,” she said.