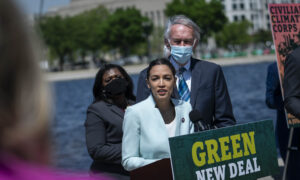 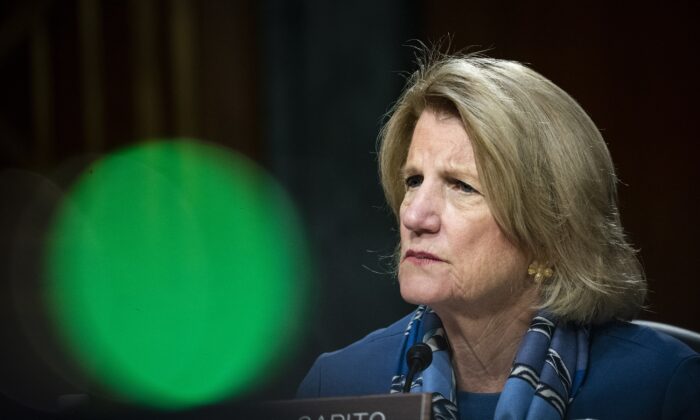 Sen. Shelley Moore Capito, (R-W.Va.) listens during a hearing on Capitol Hill in Washington on May 20, 2020. (Al Drago/Pool/Getty Images)
Politics

A group of Senate Republicans led by Sen. Shelley Moore Capito (R-W.Va.) unveiled a $568 billion infrastructure counterproposal to President Joe Biden’s sweeping $2.3 trillion American Jobs Plan, which the GOP has panned for going far beyond the traditional concept of “infrastructure.”

Republicans announced their proposal at a press conference on Capitol Hill on April 22, with Capito opening the presser by noting longstanding bipartisan calls to fix the nation’s aging infrastructure, adding that the GOP defines the concept more narrowly, as “core infrastructure, physical infrastructure.”

Capito, a member of the Senate Committee on Environment and Public Works, shared an overview of the GOP proposal in a tweet, in which she said that Biden’s plan “goes beyond what constitutes infrastructure. Today, we set a clear path forward on core principles that DEFINE infrastructure & address our country’s needs.”

“I think it’s important for you all to realize that this is the largest infrastructure investment that Republicans have come forward with,” Capito said. “This is a robust package.”

Senate Minority Leader Mitch McConnell took to Twitter with a call for Democrats and Republicans to work together on a bipartisan deal.

“Americans need and deserve bipartisan infrastructure solutions. I hope Democrats will come to the table and work with us on a bipartisan path forward to strengthen our homeland,” McConnell wrote on April 22.

Sen. Mitt Romney (R-Utah), widely viewed as a moderate who can work across the aisle, echoed McConnell’s hope for a joint solution.

“The infrastructure proposal led by @SenCapito is wisely focused on actual infrastructure and addresses real deficiencies. It’s a responsible, solid step forward, and the Administration should welcome efforts to find common ground and meet us at the negotiating table,” he said in a tweet.

After the press conference, Capito clarified to reporters that the GOP infrastructure proposal is an initial framework that she expects will be fleshed out with specifics in the course of negotiations with Democrats.

“I feel like the White House and other counterparts on the House side want to try to reach a consensus ‘hard’ infrastructure bill,” Capito said. “I’m an optimistic person. I think this is how we should work and want to work.

“I tend to be a little bit too optimistic sometimes, but it’s sure worth a try.”

Republicans have been wary of the $2.3 trillion price tag of Biden’s American Jobs Act, arguing that it goes well beyond what people normally think of as infrastructure.

Biden’s plan includes $100 billion in workforce development programs, $400 billion toward expanding access to home- or community-based care for aging relatives and people with disabilities, $25 billion to increase the supply of child care, $300 billion to strengthen manufacturing supply chains, and $10 billion for a new Civilian Climate Corps to address climate change.

McConnell wrote on Twitter on April 13, “There is a bipartisan appetite for smart infrastructure bills. In fact, all the multi-year highway bills have been bipartisan going back decades. There isn’t an appetite for using the word ‘infrastructure’ to justify a multitrillion-dollar slush fund for unrelated bad ideas.”

House Speaker Nancy Pelosi (D-Calif.) said on April 15 that she hopes Republicans will back Biden’s plan but, if not, Democrats are ready to go it alone through the reconciliation process, as they did with the $2 trillion American Rescue Plan, which received zero GOP votes.