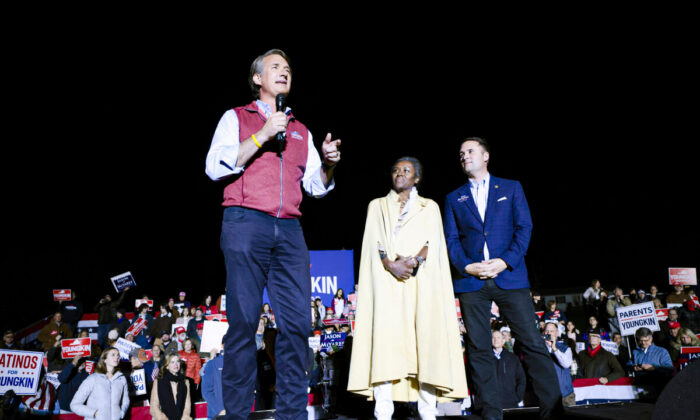 Republicans in Virginia triumphed in the closely watched races for governor, lieutenant governor, and attorney general on Tuesday.

Republican Glenn Youngkin topped Democrat Terry McAullife in the gubernatorial race, according to a projection by Decision Desk HQ. Youngkin led 52–46 with 86 percent of the districts reporting at 9:50 p.m. ET.

Republican Jason Miyares defeated Democrat Mark Herring in the race for attorney general, according to a projection by Decision Desk HQ. Miyares led 52–47 with 85 percent of the districts reporting at 9:52 p.m. ET.

And Republican Winsome Sears is the projected winner in the Virginia lieutenant governor contest, beating Hala Ayala, according to a projection by Decision Desk HQ. Sears led 53–46 with 86 percent of the districts reporting at 9:55 p.m. ET.

The gubernatorial race in Virginia was the most closely watched of the off-year elections and was viewed by some as a referendum on the first months of the presidency of Joe Biden. The three victories are a major signal for both political parties because Biden carried the state comfortably in 2020 by a 10-point margin.

Youngkin and McAullife argued over some of the most divisive issues in the nation on the campaign trail, including abortion, the teaching of critical race theory, and the presidency of Donald Trump.

The election outcome is particularly notable because the electorate cared less about the pandemic than the economy. According to an AP poll, 34 percent of Virginia voters ranked the economy as their top priority, twice as many as the 17 percent who picked COVID-19. The White House has struggled over the past few months with a sluggish economic recovery compounded with an alarming rise in inflation.

The three losses in a state that has trended toward Democrats for more than a decade would deepen the sense of alarm inside the party heading into next year’s midterm elections when control of Congress is at stake.

Voting proceeded largely without incident across Virginia on Tuesday. McAuliffe and Youngkin were mostly out of sight ahead of election night parties planned in the critical northern Virginia suburbs that each campaign was counting on.

Youngkin was endorsed by Trump but didn’t personally appear with him, though the party is still dominated by the former president.

McAuliffe, by contrast, campaigned with his party’s top national stars, including Biden, whose last visit to Virginia came a week before Election Day.