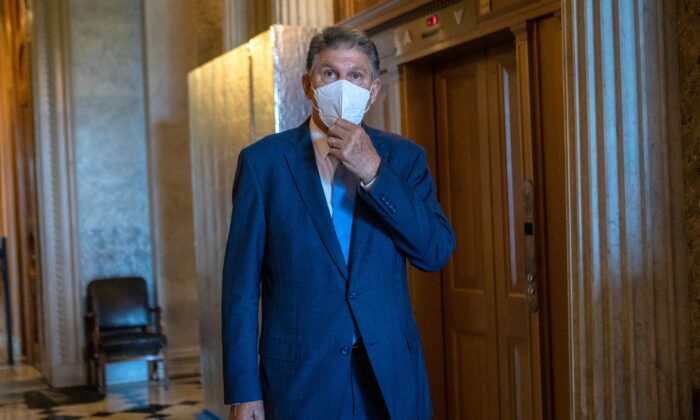 Republicans Share the Blame for the Biden Spending Spree

This column is partly a mea culpa. I admit it. I was wrong. I bought Democratic West Virginia Sen. Joe Manchin’s (and to a lesser extent Arizona Sen. Kyrsten Sinema’s) lies for the past 12 months. He said spending was out of control and this was causing inflation. He said he would protect the oil, gas, and coal industry from the climate change crazies in his own party.

Many of my colleagues warned me that you can’t take Manchin seriously. He will break your heart.

He has renounced everything he has said about Build Back Better. But one reason I thought he would block this horrific $700 billion tax and spend Inflation Acceleration Act is that the biggest loser state by far would be West Virginia. That’s where so much of our coal and natural gas comes from. Here’s a fine analysis by the folks at the Institute for Energy Research:

“West Virginia is the nation’s second-leading coal producer and the state generates 88 percent of its electricity from coal. Previously, Senator Manchin told his constituents that we must ‘innovate not eliminate.’ But, the deal Manchin crafted with Senate Majority Leader Charles Schumer will do the opposite. It will reduce coal-producing operations and do little to innovate coal assets, as the subsidies for renewables are so generous that more coal generators will be shuttered.”

Similarly, Sinema had said she couldn’t vote for the Biden tax increase plan that would hurt Arizona businesses. But in the end, she did some damage control, but she voted for the biggest tax increase in years.

One open question is whether this was all an elaborate ruse, orchestrated by Manchin and Schumer. It seems it was. Liar, liar, pants on fire.

What is for sure is that Manchin and Schumer played the Republicans in the Senate like a fiddle.

Once Manchin had blocked the Build Back Better bill, more than a dozen Republican senators provided the margin of victory to pass a sham $1.1 trillion “infrastructure” bill, which was really a Green New Deal down payment.

Then last month, after the Democrats had presumably declared the Build Back Better bill a dead letter, more than 16 Republican senators voted yes to a $200 billion corporate welfare bill for more green energy and a bailout to the semiconductor industry. This was a classic bait-and-switch.

And by falling for it, the GOP handed two bipartisan victories for Biden on oinker bills. Now the conservative base is demoralized and wondering whether Republicans would change any of the culture of debt spending in Washington.

Manchin keeps saying that the deal he cut provides for more fossil fuel development. I refuse to believe he is that naïve. This will surely reduce coal-producing operations because the subsidies for renewables are so generous that coal and other energy forms won’t be able to compete. And the chances that a Biden Environmental Protection Agency and Interior Department are going to start issuing drilling permits are pretty close to zero.

If this is such a victory for fossil fuels, senator, then why are the radical green groups partying like it’s 1999?

Meanwhile, Politico, Bloomberg, and The Washington Post are celebrating President Joe Biden’s bipartisan “victories” and practically exalting him as being the most “productive” president since FDR.

He’s been quite “productive” alright. In producing debt, deficits, and runaway inflation. Add up the total increase in the debt in 18 months and we are coming close to $4 trillion.

There are a lot of villains associated with this fiscal mayhem. But the story is a reminder there’s a good reason the Republicans are known as the “stupid party.” How do you get outsmarted by Chuck Schumer?