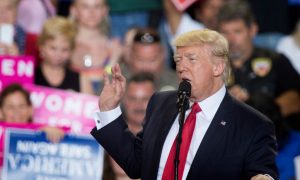 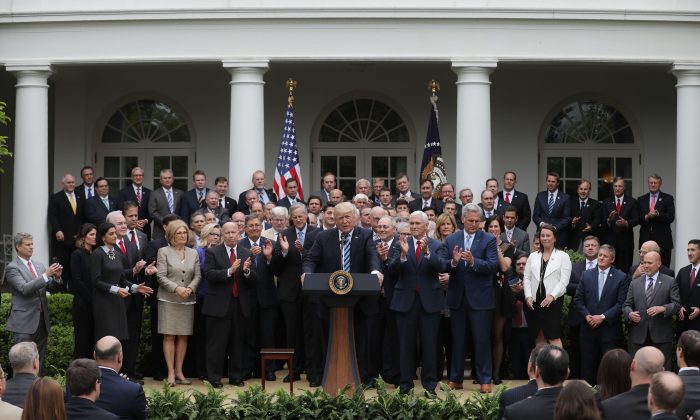 President Donald Trump and Vice President Mike Pence with House Republicans, after they passed legislation aimed at repealing and replacing Obamacare, in the Rose Garden of the White House on May 4, 2017. (REUTERS/Carlos Barria)
Politics

Republicans Seek to Reform Medicaid by Changing How It’s Funded

The success of any reform of U.S. health care will stand or fall with the provisions made for Medicaid. It has the most beneficiaries of any U.S health program, takes a sizable and increasing portion of federal and state budgets, and serves the most vulnerable among us—the indigent and the disabled.

A few numbers give an idea of the size and cost of this giant program.

Medicaid’s enrollment, at 71.6 million, is larger than the population of France and includes about 22 percent of the U.S. population.

Combined federal and state spending on Medicaid in fiscal 2016 was $574.2 billion.

The Affordable Care Act (ACA), also known as Obamacare, has expanded the size and cost of Medicaid by using it as a primary means of insuring those previously uninsured. While Medicaid had been limited to certain classes of people, excluding most able-bodied adults, the ACA encouraged states to expand Medicaid by enrolling everyone whose incomes were below 133 percent of the poverty level, which now sits at $13,860 for an individual.

When the ACA was fully implemented in January 2014, about 59.8 million people were enrolled in Medicaid. Enrollment has since swelled by almost 12 million, more than half of the 20 million the Obama administration claimed were newly insured by the ACA.

In expanding Medicaid, the ACA built on the existing structure, whereas the Republicans’ bid to replace the ACA seeks to transform Medicaid by changing its structure.

The GOP’s American Health Care Act (AHCA) passed the House of Representatives on May 4 without a single Democrat vote. The Senate is now drafting its own bill. If that passes, the differences between the House and Senate bills will be hammered out in conference.

Medicaid currently operates with the federal government matching or exceeding state spending—with the federal amount varying from $1 to $2.94 for each state dollar spent, depending on the state’s per capita income. On average, the U.S. government covers about 62 percent of Medicaid costs. There are no limits on how much a state can spend through its Medicaid program.

States have a certain degree of flexibility, with each setting up its own program. However, while states might decide to offer different baskets of services or ways of providing care, they are all in the same straitjacket regarding finances. According to the Kaiser Family Foundation, Medicaid currently takes 20 percent of state budgets, and the amount is steadily increasing.

In a 2012 article in National Review, Avik Roy, author of “How Medicaid Fails the Poor,” diagnoses a fundamental problem with Medicaid caused by the unforgiving financial situation.

The Medicaid law prohibits states from increasing co-pays or deductibles for many services, and in general, states are not allowed to limit eligibility for Medicaid. The only way left open for states to cut costs is to reduce the amount paid to doctors. And those costs have been cut to the bone.

As a result, many doctors refuse to see Medicaid patients. This can make it difficult for Medicaid beneficiaries to have primary care physicians, and it especially causes shortages in specialists.

Roy links these problems with dozens of studies showing that the care provided by Medicaid is very poor. For instance, a 2010 study from the University of Virginia showed that Medicaid patients who underwent surgery were 97 percent more likely to die in the hospital after surgery than patients on private insurance.

Roy concedes that “it may well be that Medicaid does offer a modest benefit to some people at the bottom of the income ladder.” And some studies do give a more hopeful picture of the program.

The 2008 Oregon Health Insurance Experiment found that Medicaid coverage reduced debt, reduced depression, and increased utilization of health care services, but showed no measurable improvement in physical health. Participation in the program had no significant effect on employment status or earnings.

A 2015 University of Michigan study found that children born of mothers on Medicaid were more likely than those who were uninsured to grow up into healthy adults. Another study that year by the Harvard Center for Population and Development Studies found a correlation between pregnant women going on Medicaid and positive economic outcomes later in life for their children.

The Republicans seek to reform Medicaid by changing how it is financed.

Both options provide states with much more flexibility in how they run Medicaid.

Writing in 2012 about possible reforms of Medicaid, Roy said: “The most attractive approach would be to apply to Medicaid our remarkably successful experience with reform of the classic welfare program, Aid to Families with Dependent Children (AFDC). In 1996, Congress restructured AFDC as a series of block grants to the states. Using this approach with Medicaid could trigger a revolution in American health policy, by allowing the 50 states to experiment with innovative new approaches to efficiently deliver health care to the needy.”

While both the per capita matching funds and the block grants seek to unleash innovation, they provide the states with very different incentives, according to Michael Cannon, director of health policy studies at the Cato Institute.

“The current per dollar matching grant system provides an unlimited entitlement to federal funds,” Cannon said. “The per capita matching grant system allows the states to keep that unlimited entitlement to federal funds going if they keep expanding enrollment, and so it creates enormous pressure for states to expand enrollment.”

Cannon prefers giving the states block grants, which have the benefit of limiting federal expenses to a fixed amount, making the program financially sustainable.

Trump Seeks to Slash $3.6 Trillion of Spending in Austere Budget

He regards Medicaid as a very successful program and says the question should be how to improve a program that is already functioning well.

Hoadley points out that the Republican proposal, according to the Congressional Budget Office, would take $880 billion out of Medicaid over the next 10 years. He anticipates that the amount of the block grants will tend to be less than actual Medicaid expenses, with the difference growing over time—thus bleeding resources out of the Medicaid program.

In addition, Hoadley said block grants do not allow states to respond to pressures external to the Medicaid program. If there is a recession that lowers state revenues, or an infectious disease that increases medical costs, or a powerful but expensive new drug that becomes available, states will be financially limited in how they can respond.