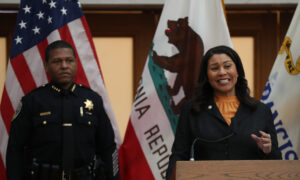 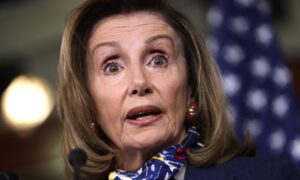 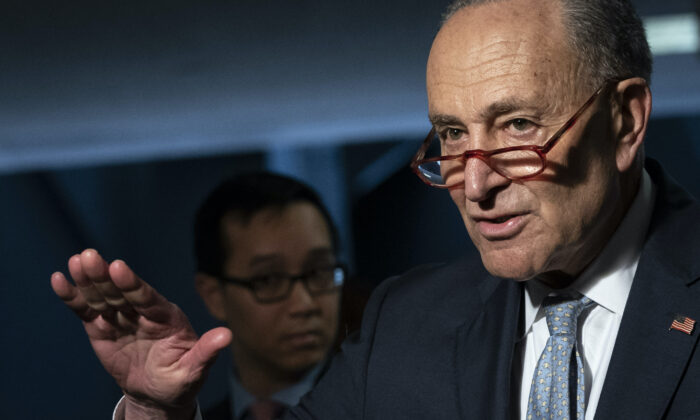 Senate Minority Leader Chuck Schumer wants to ban from hearings and floor votes any colleague who tests positive for the CCP virus, a proposal that Republicans say is an effort to stall Judge Amy Coney Barrett’s Supreme Court nomination.

“The U.S. Senate has become a COVID-19 hotspot and we need to take immediate action, guided by the best science, to put in place additional protections to safeguard the health of the Senate complex workers, Senate staff, and Senators,” Schumer said in an Oct. 7 statement.

“Senate Republicans must join us here in reality and acknowledge that through their inaction, they are creating a truly dangerous situation,” said Schumer, who was joined in the statement by Sen. Amy Klobuchar (D-Minn.).

Senators who don’t test negative for the disease would be barred from being present in committee hearings or on the Senate floor; Senate rules require senators to be physically present to vote.

The testing proposal follows Schumer’s previous repeated calls for a delay in the Barrett hearings, which begin Oct. 12 before the Senate Judiciary Committee.

“We now have two members of the Senate Judiciary Committee who have tested positive for COVID, and there may be more,” Schumer said Oct. 2. “I wish my colleagues well. It is irresponsible and dangerous to move forward with a hearing, and there is absolutely no good reason to do so.”

Earlier this year, Schumer agreed with Senate Majority Leader Mitch McConnell (R-Ky.) and Speaker of the House Nancy Pelosi (D-Calif.) when they turned down President Donald Trump’s offer of assistance in testing members of Congress and their aides.

“His sudden flip-flop is just another tactic from the left to derail hearings for Judge Amy Coney Barrett. They know Barrett has the support of the American people, and they are looking for any excuse to delay her confirmation,” Anderson said.

Similarly, Brian Darling, former senior counsel to Sen. Rand Paul (R-Ky.), told The Epoch Times on Oct. 8 that “Democrats will use any issue and procedural roadblock possible to slow down the Barrett confirmation. The issue of testing only has become an issue for Democrats because they can use it as a tool to slow the nomination process.”

Norquist wondered if Schumer’s “real problem is that Barrett has the votes to be confirmed” and Schumer “needs to avoid hearings that will make his party look hostile to the 25 percent of Americans who don’t think being Catholic should rule them out of polite company.”

A veteran Senate Republican strategist told The Epoch Times that “Schumer and Senate Dems are throwing every new argument up, even those that contradict earlier positions, as an effort to stop this constitutional procedure.”

The veteran strategist, who spoke on background, said, “Why didn’t he demand this earlier in the year? Why only now? And will he demand it after the Judge Barrett hearings are over? Of course not.”

But Jim Manley, former communications director for then-Senate Majority Leader Harry Reid (D-Nev.), rejected the GOP criticisms, saying, “The idea that these Republicans are going to try to jam this nomination through while members are testing positive for COVID is disgraceful.”

Manley argued that Senate Republicans “can’t be bothered to pass more aid to help the economy but they are permitted to violate every Senate rule and norm to confirm another Supreme Court nominee is just another indication of how out of whack the Republican Party has become.”

Another Democratic strategist, Cristina Antelo, pointed to the advanced age of many senators as a reason for regular testing.

“Considering that we know the virus has a stronger impact and can turn deadly on those over age 65, and males, in particular, I am not sure why a proposal for testing a body that is largely old and male is all that controversial,” Antelo said. “As background, 48 U.S. Senators and 147 members of the House are over age 65, and men make up 74 percent of the Senate and 77 percent of the House.”

Meanwhile, Pelosi has maintained her opposition to establishing a systematic testing program for House members and staff following news that 123 House aides and contractors have tested positive or are presumed positive.

Ashley Phelps, a spokesman for Rep. Rodney Davis (R-Ill.), the ranking minority member of the House Committee on Administration, who has strongly criticized Pelosi on the test issue for months, told The Epoch Times on Oct. 7 that the number underestimates the extent of the problem.

“The fact remains that we don’t know how many people are still coming in to work or the actual positivity rate on Capitol Hill because the Speaker has failed to implement a health monitoring plan that includes some level of testing—like many universities, private businesses, and others have done to prevent the spread at their institutions,” she said.