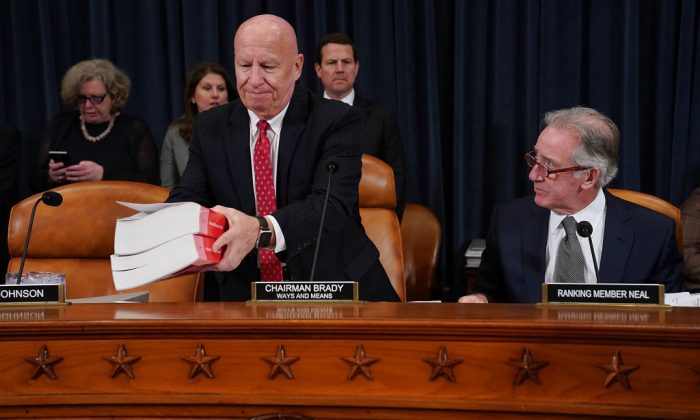 WASHINGTON—House Republicans introduced their much-anticipated tax reform, the Tax Cuts and Jobs Act, on Nov. 2. If passed by both chambers, it will be the first major legislative effort of the Trump administration to pass Congress and the biggest tax code rewrite since the Reagan years.

GOP lawmakers are moving fast on their reform plan, and getting it across the finish line seems possible for the first time in decades.

“All of our efforts have led to this one moment,” said House Ways and Means Committee Chairman Kevin Brady, during the tax reform markup session on Nov. 6.

“Today, we stand on the doorsteps of delivering the most sweeping tax overhaul in more than 30 years.”

The Tax Cuts and Jobs Act is a 429-page document, while the existing income tax code spans more than 70,000 pages.

Under the new plan, a typical middle-income family of four making $59,000 per year will receive a $1,182 tax cut, according to the Republicans.

The bill condenses the current seven tax brackets down to four: 12 percent, 25 percent, 35 percent, and 39.6 percent. And it substantially increases income limits for each tax bracket.

The plan leaves the top individual tax rate at 39.6 percent, which would be applied to high-income earners. These taxpayers would also pay an additional 6 percent surcharge on the first $200,000 they make over $1 million; after paying that “bubble tax,” their rate would return to 39.6 percent.

The standard deduction would nearly double, to $12,000 for individuals and to $24,000 for married couples filing jointly.

The bill expands the child tax credit from $1,000 to $1,600 per child. However, the deduction for personal exemptions would be eliminated.

The plan also reduces the state and local tax (SALT) deduction, which is perhaps one of the most controversial proposals.

Under current law, taxpayers can deduct state and local income and sales taxes from their federal taxable income. The proposed House bill would only allow a deduction for state and local property taxes up to $10,000.

According to Republican supporters of the change, the SALT deduction is unfair to residents of lower-tax states. They argue that other states are subsidizing high-tax states like California and New York, which happen to be heavily Democratic.

Those who benefit from the SALT deduction the most are high-income taxpayers in high-tax states, according to the Tax Policy Center.

Democrats, however, argue that ending the SALT deduction would hurt middle-class families. Its elimination would affect state budgets and their ability to fund public services, including education and health care, say critics.

Some House Republicans from high-tax states are expected to vote “no” on the bill, because the reduction in the SALT deduction would cause taxes to rise for their constituents. At this time, their opposition is not expected to stop the bill from passing.

Sen. David Perdue (R-Ga.) defended the repeal of the SALT deduction during a panel discussion at the Heritage Foundation on Oct. 24.

According to him, a couple with two children living in California should pay the same federal income taxes as a couple living in Iowa.

“They have the same income, same deduction, and same house. Everything is the same. Why should they pay different amounts to the federal government? They should not, in my opinion,” he said.

In addition, the bill would eliminate most itemized deductions including for medical expenses and student loan interest—changes that have also triggered a backlash from Democrats.

Under the plan, existing homeowners can keep their mortgage interest deduction, but future purchases will be capped at $500,000 (lower than the current cap of $1 million for couples).

Republicans were reported to be considering changes in 401(k) retirement plans, but decided to leave the plans untouched. The capital gains and dividends tax rates remain the same, and the bill does not repeal the net investment income tax.

Overall, Republicans claim that their plan will simplify the tax code by eliminating many itemized deductions.

“We are seeking a tax code so fair and simple nine out of ten Americans will be able to file their taxes using a simple postcard-style system,” said Brady.

The corporate income tax rate will be slashed from 35 percent to 20 percent, which is the centerpiece of the bill. And the new rate would be effective beginning in 2018, according to a report by KPMG, the audit, tax, and advisory firm.

However, service businesses, including law, accounting, consulting, financial service and brokerage firms, generally would not be able to benefit from the preferential rate and would continue to be subject to the individual tax code.

As a transition to the territorial system—which only taxes income earned inside the home country, unlike a worldwide taxation system that taxes income earned anywhere in the world—there will be a one-time tax payable on profits that have already accumulated overseas.

The repatriation would impose a 12 percent tax rate on offshore cash of U.S. companies and a 5 percent rate on illiquid assets. The resulting tax could be paid gradually over eight years.

Through this change, Republicans aim to bring trillions of corporate income parked overseas back to the United States.

“We are going to see the export of even more American jobs and the outsourcing of those jobs to other countries,” he said during the tax reform markup session on Nov. 6.

He argued that the bill would benefit only a privileged few and create trillions of dollars in additional debt.

“Its underlying premise [is] that if you throw enough money to those at the top, it will trickle down and grow the economy,” he said.

Republicans believe that the new tax code will spur economic growth that will allow the plan to pay for itself over the long run.

According to a study by the Tax Foundation, the tax bill would lead to nearly 4 percent higher GDP over the long term, more than 3 percent higher wages, and an additional 975,000 full-time jobs.

For tax reform to become law, both the House and the Senate have to pass the same legislation and send it to the president. Republican leaders have set an ambitious schedule to get a bill to the president’s desk by Christmas.

“It is possible the House could pass the bill as soon as mid-November if there are no major setbacks causing a delay in either the Ways and Means Committee or in the full House,” stated the KPMG report.

“It is not yet certain when Senate floor action would commence or when a vote on final passage would take place,” the report said. “The Senate bill potentially could be very different from the House bill.”

If the House and the Senate pass different versions of the bill, a conference committee may be formed to draft a compromise bill that both houses can accept. If the differences are significant between the two bills, reaching an agreement in a short period could be challenging, according to KPMG.

“Significant hiccups at any of the many junctures along the path to enactment could derail this tight timeline and push the process over into 2018 or lead to the demise of the bill.”