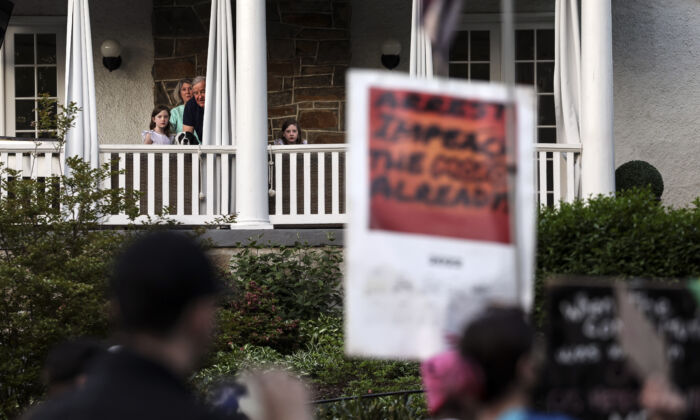 House Republicans are pressing Attorney General Merrick Garland to charge demonstrators over protesting outside the homes of conservative Supreme Court justices who supported a draft opinion striking down legal protections for abortion.

Failure to do so is “a shameless and implicit endorsement of mob rule in America,” 48 members of Congress said in an open letter (pdf) to the attorney general on May 11, urging him to punish what they called “mobs” in accordance with the law.

The joint letter, led by Rep. Claudia Tenney (R-N.Y.), underscored the need to safeguard Section 1507 of Title 18 of the U.S. Code, under which it is a federal crime “to picket or parade outside of a judge’s home, particularly if the intent of such actions are to influence them in the discharge of their official duties.”

“The right to peaceful assembly is among our most sacred rights as Americans, and we should guard it zealously, but this right does not permit us to intimidate judges, jurors, or officers of the court,” Tenney said in a separate statement.

It came after the leak of a draft majority Supreme Court opinion to overturn Roe v. Wade, a landmark decision handed down in 1973 that legalized abortion nationwide. The draft decision, first published by Politico on May 2, has since drawn protests nationwide, including at Catholic churches on Mother’s Day and at judges’ publicized home addresses.

Dozens of pro-abortion protesters have flocked to the houses of Chief Justice John Roberts and Justice Brett Kavanaugh in opposition to the draft opinion. On May 11, seven activists quietly walked in circles while dressed as “handmaids” near Supreme Court Justice Amy Coney Barrett’s house.

Calling it a “blatant attempt” to obstruct justice by terrorizing the Supreme Court justices and their families, House Republican Conference Chairman Rep. Elise Stefanik (R-N.Y.) said Americans “must maintain the independence of our courts.”

Police said a fire was set in an apparent arson attack at the headquarters of a pro-life organization in Madison, Wisconsin. There were also reports of vandalism at a pro-life pregnancy clinic in Oregon.

“Coercing a judge by threatening their families, vandalizing their homes, and firebombing pro-life clinics is not ‘free speech,’” said Congressman Doug LaMalfa. “There are plenty of places to protest, including at the Supreme Court. Protesting at a judge’s home is not allowed by law for a reason.”

“We therefore ask a simple question: as Supreme Court Justices are being illegally targeted at their homes, do you intend to enforce the law?” the Republicans wrote in the letter.

White House press secretary Jen Psaki said on May 9 that rights to protest “should never” include violence, threats, or vandalism. “We certainly continue to encourage that outside of judges’ homes,” Psaki reaffirmed the following day. “And that’s the president’s position.”

Some Democratic senators also rebuked intimidation of the justices, according to Politico, yet the Biden administration is now on the cusp of its decision on whether or not to prosecute violators as the soft approach has drawn fire from GOP lawmakers.

“The same party and administration that wanted to convince the public that Republicans undermined the rule of law are now openly intimidating the third branch of government or supporting the efforts of those who do,” Rep. Markwayne Mullin (R-Okla.) said, calling it “disgraceful.”

Rep. Andy Barr (R-Ky.) said, “If Attorney General Garland condones or gives a pass to this criminal behavior like WH Press Secretary Jen Psaki, it would be an enormous blow to the rule of law in our country.”

“General Garland has said he wouldn’t do the President’s bidding as Attorney General, now is his time to prove it,” the congressman wrote in a statement.

Virginia’s attorney general has called on local prosecutors to enforce a law that bars disruptions outside people’s homes after about 100 protesters descended on the residence of Supreme Court Justice Samuel Alito on May 9.

A White House spokesperson did not immediately respond to a request for comment.