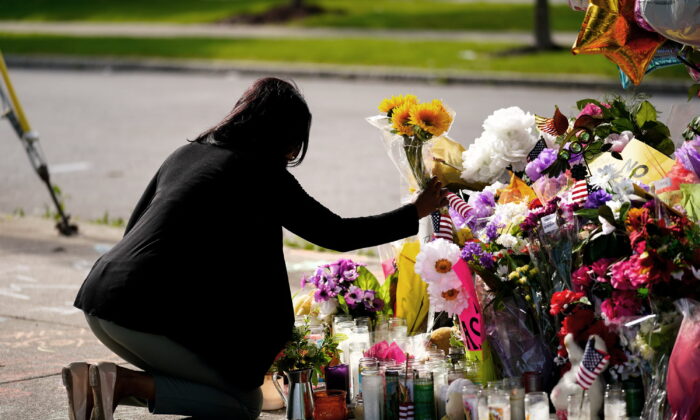 Shannon Waedell-Collins pays her respects at the scene of Saturday's shooting at a supermarket in Buffalo, N.Y., on May 18, 2022. (Matt Rourke/AP Photo)
Congress

Several Republican senators signaled they will work to stop the passage of legislation approved by the House that would authorize special offices within several government agencies to investigate alleged domestic terrorism, warning that such measures could be weaponized against the public.

“It sounds terrible,” Sen. Josh Hawley (R-Mo.) told The Hill about the proposal, comparing it to the PATRIOT Act, or the Disinformation Governance Board that was set up under the Biden administration before it was put on “pause” last week.

“It’s like the disinformation board on steroids. Another way to look at is the PATRIOT Act for American citizens,” the Missouri senator said in reference to the Bush-era bill that was enacted in the aftermath of the Sept. 11 attacks. The PATRIOT Act has long been flagged as a law that expanded the government’s surveillance capacities, allowing it to track email and phone conversions as well as collect bank records—although it was initially to be used to target Islamic terrorists.

Hawley also said that the measure would likely not receive 10 GOP votes in the Senate. Senate Majority Leader Chuck Schumer (D-N.Y.) said he would bring the bill to the floor, in response to the mass shooting on May 14 at a supermarket in Buffalo, New York, that left 10 dead.

The bill was approved by the House in a 222–203 vote. Rep. Brad Schneider (D-Ill.), who introduced it, suggested that Fox News’ Tucker Carlson helped incite the Buffalo shooting—without providing evidence—and said that the “Domestic Terrorism Prevention Act is what Congress can do this week to try to prevent future Buffalo shootings.”

Republicans say they’re opposed to giving more power to the Department of Justice and Department of Homeland Security to surveil Americans, arguing that a potential law could be used to target dissidents and political speech.

“I’m completely opposed to this idea that we would be giving the federal government and federal law enforcement power and authority to surveil Americans, to engage in any kind of monitoring of speech that is directed toward censorship,” Hawley told The Hill. “I think it’s extremely frightening and I can’t believe they haven’t learned their lesson from the disinformation board debacle.”

He said the measure is actually designed merely to target Republicans and conservatives, although the alleged Buffalo gunman, Payton Gendron, wrote in a manifesto attributed to him that he wasn’t a conservative and appeared to have some Marxist-aligned viewpoints. Gendron, who described himself as a white supremacist, also said he was targeting the supermarket because black people frequented the establishment.

The Department of Homeland Security had “a very different tone” with left-wing extremist groups that have threatened the Supreme Court with violence in recent weeks, Hawley said. A pro-abortion group claimed responsibility for the firebomb attack on the office of a Wisconsin pro-life group and warned news outlets that more will be on the way if the court overturns Roe v. Wade.

About a week ago, Sen. Ron Johnson (R-Wis.), the ranking Republican on the Senate Homeland Security Committee, wrote a letter to the Justice Department asking about what steps were being taken to curb such threats and asked why that isn’t considered an act of domestic terrorism.