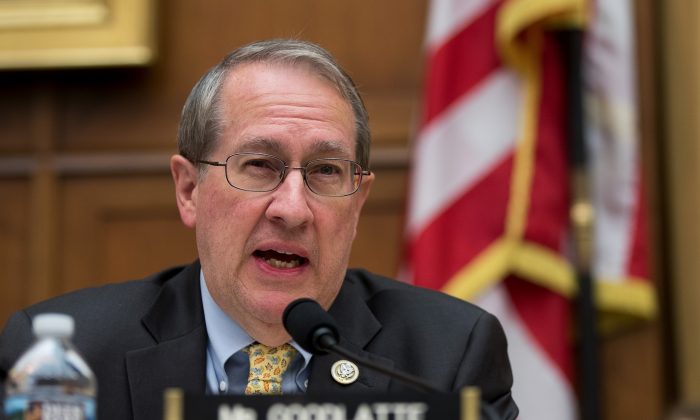 U.S. Attorney General Jeff Sessions and lawmakers are targeting the growing problem of unelected federal judges taking it upon themselves to veto presidential actions by issuing nationwide injunctions that reach far beyond the confines of a particular case.

Sessions has released a new directive to federal prosecutors asking them to try to curb these so-called “non-party” injunctions that allow judges to function as lawmakers.

At the same time, House Judiciary Committee Chairman Bob Goodlatte (R-Va.) is promoting the proposed Injunctive Authority Clarification Act of 2018, in an effort to restore the traditional understanding that a federal court’s injunctive power extends only to the protection of the parties before it. Goodlatte’s committee approved the reform bill last week.

Conservatives have long complained that left-leaning judges use their powers to advance left-wing policies after Democrats lose at the ballot box. Thus, Democratic Party policies still end up getting enacted even when they are rejected by the voters. Nationwide injunctions issued by politicized judges are especially problematic because they allow one judge to bring federal government operations to a halt.

Judges have made it difficult for Trump to crack down on sanctuary jurisdictions that provide a haven for illegal aliens and have ordered Trump not to shut down the DACA program even though it was never authorized by Congress.

Judicial activism itself is nothing new, but the issuance of injunctions that “block the entire federal government from enforcing a law or policy throughout the country” is, Sessions said in a statement.

“This kind of judicial activism did not happen a single time in our first 175 years as a nation, but it has become common in recent years,” Sessions said. “It has happened to the Trump administration 25 times in less than two years. This trend must stop. We have a government to run.”

Sessions continued: “The Constitution does not grant to a single district judge the power to veto executive branch actions with respect to parties not before the court. Nor does it provide the judiciary with authority to conduct oversight of or review policy of the executive branch. These abuses of judicial power are contrary to law, and with these new guidelines, this Department is going to continue to fight them.”

The new memorandum, addressed to Department of Justice attorneys, makes it clear the agency opposes nationwide injunctions and directs staff lawyers to “take opportunities as appropriate to reaffirm the constitutional and prudential limitations on the remedial authority available to judges.”

Litigators should argue, the document states, that nationwide injunctions exceed constitutional limits on judges’ power and depart from longstanding equitable-relief norms. These injunctions also “impede reasoned discussion of legal issues among the lower courts,” “undermine legal rules meant to ensure orderly resolution of disputed issues,” and “interfere with judgments proper to the other branches of government.”

Federal judges have been particularly aggressive in issuing nationwide injunctions against Trump’s so-called travel bans. Judges blocked enforcement of the president’s executive orders preventing visits from residents of terrorism-prone nations, which for the most part were Muslim-majority countries.

Even though most Muslim-majority nations were excluded from the ban, critics claimed Trump was motivated by so-called Islamophobia, and judges have openly accused Trump of anti-Muslim bias.

But on Dec. 4, 2017, the Supreme Court reinforced the traditional understanding of the president’s discretion to unilaterally make decisions about who gets to enter the United States. In a 7–2 vote, the high court lifted two lower court stays hindering enforcement of Presidential Proclamation 9645, which critics of Trump claimed was a “Muslim ban.” The proclamation applies to specified categories of nationals from Muslim-majority Syria, Chad, Iran, Libya, Somalia, and Yemen. It also applies to North Korean and Venezuelan nationals.

“This a substantial victory for the safety and security of the American people,” Sessions said at the time.

Meanwhile, the House Judiciary Committee approved Goodlatte’s legislation, H.R.6730, on a vote of 14 to 6 on Sept. 13. The operative part of the bill that takes away federal judges’ ability to issue nationwide injunctions, is brief. It states simply:

‘‘No court of the United States (and no district court of the Virgin Islands, Guam, or the Northern Mariana Islands) shall issue an order that purports to restrain the enforcement against a non-party of any statute, regulation, order, or similar authority, unless the non-party is represented by a party acting in a representative capacity pursuant to the Federal Rules of Civil Procedure.’’

The ranking Democrat on the committee, Rep. Jerrold Nadler of New York, criticized the measure, saying it ought to be named “the ‘Injunctive Authority Uncertainty Act’ because this bill would inject confusion and needless barriers to relief into the legal system.”

Nationwide injunctions are “sometimes imperfect” but they are an “often essential, equitable remedy in the federal courts” when the federal government violates the Constitution “or breaks the law on a national scale,” Nadler said.

“The courts should certainly exercise caution and care when determining the proper scope of an injunction. But to prohibit nationwide injunctions in every circumstance, as this bill would do, is a gross overreaction to whatever perceived flaws this legal remedy may have.”

“No statute or procedural rule permits courts to issue national injunctions,” he said. “In fact, the traditional view of the law was that courts had no authority to issue them.”

In 1923, he noted, the Supreme Court decided in Frothingham v. Mellon not to approve a national injunction, because a court’s power is limited to “declaring the law applicable to the controversy.”

To go beyond that “would be not to decide a judicial controversy, but to assume a position of authority over the governmental acts of another and co-equal department, an authority which plainly we do not possess,” the high court stated.

This view came under attack in the 1960s, but still, “national injunctions remained rare until 2015, when conservative attorneys general used them to block major Obama administration policy actions on labor, immigration, and other issues,” Goodlatte said.  “Now, with the tables turned, the Trump administration has faced over 22 such injunctions.”

This new reform legislation “arrests a disturbing trend of judicial overreach that has frustrated administrations of both parties.”