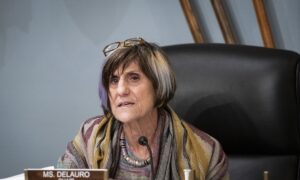 Republicans Need to be ‘Willing to Fight’: Rep. Norman

Republicans need to stand up for their values and in defense of the Constitution, according to Rep. Ralph Norman (R-S.C.).

“We’ve got to be willing to fight. We got to be bold. Being lukewarm is not going to get it now. They—the left—is so far radicalized and we’ve got to, on a local level, go to that school board meeting and say put our children back in schools,” Norman told The Epoch Times’ “American Thought Leaders” at the Conservative Political Action Conference (CPAC) in Orlando, Florida, on Saturday.

Norman said his state wasn’t shut down during the COVID-19 pandemic but that residents of neighboring North Carolina have faced restrictions.

He has contacted acquaintances there in an effort to fight back against the restrictions and called on others to do the same.

“Write a letter, get a group and go meet with public officials, saying ‘no new taxes, we want tax cuts, no new bailouts for governments,'” he said.

In one example, he outlined how parents upset over the curriculum being taught to their children could get together with like-minded parents and go to the school’s principal and advocate for change.

“It’s just accountability. What’s the harm in that? How can that hurt?” he wondered.

While some Americans were let go because their workplace either lost business or completely went out of business amid the pandemic, government officials have, for the most part, kept getting paid, Norman noted.

“We as politicians still get a paycheck. Let’s put the people first. Let the businesses operate. Let’s get this country back on a sound ‘We the People’ basis. That’s my hope and prayer, and the only way we’re going to do it is [to] get active,” he said.

Norman, along with many other Republicans, feels the GOP needs to push back against the quickly-escalating campaign against conservatives by Big Tech, colleges, and other entities.

“We’re gonna lose our republic. I feel strongly that we’re going to have to get a voice back and not be, just because we get an article written about us or Big Tech censors us—which I experienced with the frontline doctors on hydroxychloroquine—but we’ve got to take a stand,” he said.

In some cases, that’s using blunt descriptions of what’s happening or what’s being proposed, Norman added, describing government-run healthcare as socialist and against the idea of government existing to provide equal opportunity, not equal outcome.

“They changed the election laws, as an example, in violation of the Constitution, Article One, Section Two, and I think we’re going to end up in the courts. They, the left, has had the backing and the funding to file lawsuit after lawsuit,” he said. “We’ve got to get the same attitude and learn how to fight because once we lose—it’s kind of like your health—once we lose our freedoms, it’s hard to get back. You vote your way in and you shoot your way out. And I’d hate to see us become another Venezuela.”