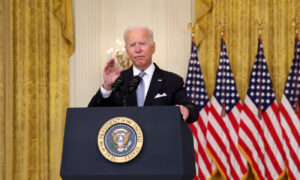 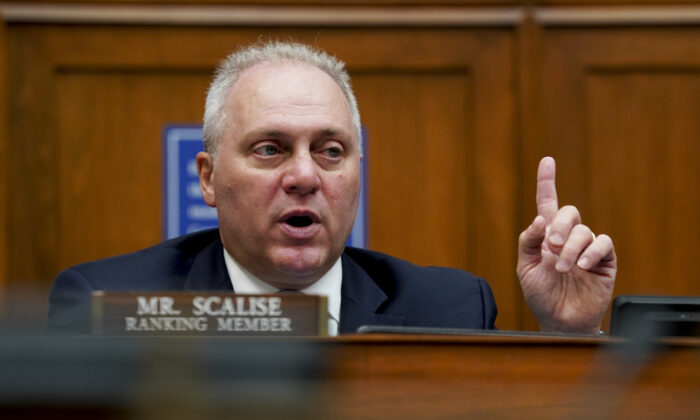 Republicans Look to Capitalize on Biden Afghan Fiasco in 2022

In a press conference Tuesday morning led by Rep. Steve Scalise (R-La.), House Republicans blasted the Biden administration for its handling of the Afghanistan withdrawal, presaging likely Republican focuses in the 2022 midterm elections.

Scalise began by blasting Biden’s handling of the ongoing situation, saying it has now devolved to the point that the government is concerned about whether or not it will be able to get U.S. citizens out of the country.

“They say it’s not happening, they say people aren’t stranded,” Scalise said. But it is, he insisted, saying that Americans are actively being hunted in Afghanistan.

Scalise handed the microphone to Rep. Jim Banks (R-Ind.), a veteran of the war in Afghanistan. Banks said that beyond the Americans and American allies trapped in Afghanistan, the Taliban had taken control of $80 billion worth of U.S. equipment, including “night vision goggles, body armor, and, unbelievably, biometric devices which have the fingerprints, eye scan, and biographical information of all the Afghans who helped us … over the last 20 years.” He continued that, “there is no plan by this administration to get those weapons back.”

If any American is not evacuated or any captured equipment is used to kill an American, Banks concluded, “the blood is on Joe Biden’s hands.”

Later, Rep. Jake Ellzey (R-Texas) took the microphone and expanded on Banks’ discussion. He addressed the claim that the Taliban will not be able to use the complex equipment and vehicles left behind during the evacuation, an idea that he said is “nonsense.” He pointed to U.S. enemies like China and Iran, who he said would be able to help the Taliban to use this new equipment.

Rep. Anthony Gonzalez (R-Ohio) focused on intelligence failures, saying that American intelligence operations in the country had gone so far downhill that “right now is more dangerous to Americans in Afghanistan than the first day we went in.”

Rep. Mark Waltz (R-Fla.) concluded with an ominous warning about the effects this failure will have on U.S. national security. With the fall of Afghanistan to the harborers of Osama Bin Laden, “America is going to face Al-Qaeda three-point-o.” Future American soldiers, he said, will have to go back into Afghanistan and fight through “our own damn equipment to fight Al-Qaeda three-point-o.”

Waltz said that in the wake of Biden’s incompetence, “this Congress is going to lead.” Scalise later emphasized this point that the Congress would do what it appeared Biden could not.

At the opening of today’s session in the House, Rep. John Joyce (R-Penn.) called Afghanistan “Joe Biden’s Saigon.” Rep. Virginia Foxx (R-N.C.) said that the president “had done irreparable damage to our international standing—not to mention our national security.”

These comments underpin a larger strategy that Republicans are likely to pursue as the country moves toward the 2022 midterms.

Biden’s approach to Afghanistan is extremely unpopular with Americans. According to a Rasmussen survey, 59 percent of likely voters say that the administration is not doing enough to rescue Americans; and an overwhelming 78 percent say that the United States should use military force if the Taliban take Americans hostage. Republicans are sure to capitalize on this unpopularity moving forward to 2022. This presents an even higher challenge for Democrats, as the president’s party is historically voted out of the majority in the first midterm of the president’s administration.

With these concerns in mind, some Democrats have put uncharacteristically high pressure on the Biden administration, while some have gone even further and are trying to dissociate themselves from the president entirely.

Sen. Mark Warner (D-Va.), chairman of the Senate Select Committee on Intelligence, said in a public statement that he feared that allies would lose faith in America’s commitments to its obligations, insisting that “the world must know that the United States stands by her friends in times of need, and this is one of those times.” Warner promised that his committee would ask “tough but necessary questions about why we weren’t better prepared for a worst-case scenario involving such a swift and total collapse of the Afghan government and security forces.”

Rep. Chrissy Houlahan (D-Pa.) went even further in her own statement on the crisis. She wrote: “These past few days have been difficult to process, and not because the Taliban’s progress was surprising. In fact, the opposite. We sounded the alarm, and our dire warnings fell on deaf ears.” This comes after it became clear to observers that the Biden administration had the intelligence to avoid the debacle but ignored it. Like Warner, Houlahan promised that she is “committed to being part of those tough conversations and holding accountable those who seemingly misled the American people.”

It is likely that the Afghanistan crisis will become as important a rallying cry for Republicans in the 2022 elections as Benghazi was in the 2014 midterm and 2016 presidential election. But in this case, Republicans are rallying around a banner that is far more widely known and far more impactful to the average American.

With congressional Republicans like Scalise and Waltz promising to take a leading role moving forward, it is likely that Americans will see Republicans as taking the crisis more seriously than Democrats—many of whom have remained silent on the situation since it began.

But polls show that for the average American, the scenes coming out of Kabul fall squarely on the commander-in-chief’s shoulders; and for many swing voters, these images are unlikely to be soon forgotten. While Biden and Democrats may hope that voters forget, conferences like Scalise’s today are likely to become a common, key strategy for Republicans in 2022.