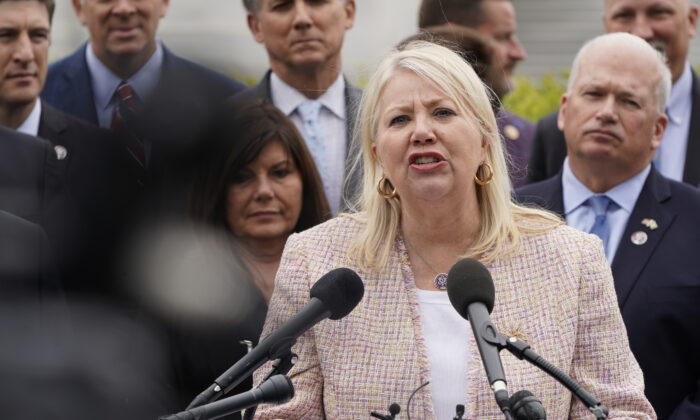 Rep. Debbie Lesko (R-Ariz.) speaks to the media with members of the Republican Study Committee about Iran in Washington, on April 21, 2021. (Joshua Roberts/Getty Images)
Policies & Impacts

Republican lawmakers are pushing to establish a “Women’s Bill of Rights” to enshrine into law protections for biological females.

The bill defines sex as a person’s biological sex at birth. Under the legislation, “woman” and “girl” refer to human females, and the terms ‘‘man’’ and ‘‘boy’’ refer to human males.

Acknowledging biological differences between the sexes is important for “protecting sex-segregated activities and organizations,” according to a press release issued by Rep. Debbie Lesko (R-Ariz.), who unveiled the bill outside the Capitol Hill on May 19. The bill also affirms the importance of using “mother” and “father” in the written law to “protect families and bolster parents,” it added.

“[T]here are important reasons to distinguish between the sexes with respect to athletes, prisons, domestic violence shelters, restrooms, and other areas, particularly where biology, safety, and privacy are implicated,” states the bill, a copy of which was shared with The Epoch Times.

A companion version of the bill has been introduced in the Senate by Sens. Cindy Hyde-Smith (R-Miss.), Cynthia Lummis (R-Wyo.), and Ted Cruz (R-Texas).

“The world is totally upside down when I have to introduce legislation signifying a woman versus a man,” said Lesko at the Thursday press conference.

“Our colleagues on the left are trying to erase women,” she said. “Whether it’s taking the word ‘mother’ out of written law or allowing biological men in women’s domestic violence shelters, the Democrats are erasing women and the spaces that are uniquely ours.”

Five other lawmakers co-leading the bill also spoke at the press conference.

Rep. Diana Harshbarger (R-Tenn.) said she is leading the effort to clarify biological gender distinctions “at a time when our future generations of female leaders need it the most.”

“It’s disheartening and infuriating to see some of our nation’s leaders reject the unique biological characteristics that make a woman,” she told The Epoch Times.

At the press conference, Harshbarger described being a woman to mean “the incredible honor of being a wife, a mother, a grandmother, a female business owner, and now a congresswoman.” Defining what a woman is, she said, is “not that hard.”

“As a pharmacist, allow me to define a woman for you,” she said at the press conference. “Females are the sex that have the capacity to bear children or produce eggs. In simple terms, that means a human capable of giving birth to another human.”

“If you’re still confused, follow the science. Women have two X chromosomes, are born with a uterus and ovaries, and they have a menstrual or ovarian cycle, which means they can give birth,” she added.

Rep. Mary Millier (R-Ill.) said she is supporting the bill on behalf of her five daughters, who, she noted, are “all women.”

“This common-sense document will help codify our common understanding and the reality we all know of the words ‘female,’ ‘woman,’ and ‘sex’, and I am proud to support it,” she told The Epoch Times.

Vicky Hartzler (R-Mo.) invoked the example of Hans Christian Andersen’s folktale “The Emperor’s New Clothes,” where everyone became “fools” watching their emperor walk naked on the streets—”until a young boy spoke up and asked the obvious question: ‘Why does the emperor not have any clothes on?’”

“I feel like we are living in that story today,” she said. “Someone needs to speak up and state the obvious, and wake everyone up.”

Debates about fairness have come into focus since Lia Thomas, a University of Pennsylvania transgender athlete on the men’s swimming program as recent as 2019, broke three women’s records in freestyle swimming last December.

Aimee Arrambide, executive director of the pro-abortion group Avow Texas, testified to a House Judiciary Committee hearing on Wednesday that she believes men can become pregnant and have abortions.

Rep. Jim Banks (R-Ind.), chairman of the Republican Study Committee, the largest group of conservative lawmakers in Washington, cited the testimony as one example of what he saw as the left’s attempt to deny people’s biological differences.

“But denying reality is difficult and Americans are hard to fool,” he said at the press conference, noting that a bill by his colleague Rep. Greg Steube (R-Fla.) to disqualify transgender students from competing in women’s sports has received 183 signatures from House Republicans, 35 votes shy of the 218 needed to force a vote on the House floor.