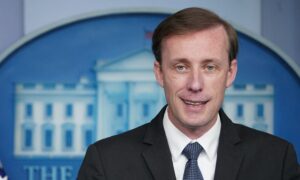 Security personnel keep watch outside the Wuhan Institute of Virology during the visit by the World Health Organization team tasked with investigating the origins COVID-19, in Wuhan, Hubei Province, China, on Feb. 3, 2021. (Thomas Peter/Reuters)
Pandemic Ties to CCP

Republican lawmakers have introduced a bill that would authorize sanctions and other restrictions on scientists affiliated with the Chinese Communist Party (CCP) unless Beijing allows a transparent, international probe into the origins of COVID-19 at suspected labs in China.

Rep. Mike Gallagher (R-Wis.) on Tuesday introduced a House version of the COVID-19 Act of 2021 (pdf), while Sen. Marco Rubio (R-Fla.) on Monday introduced a Senate version (pdf) of the bill, which gives China’s communist leaders 90 days from enactment to allow a credible and comprehensive investigation into the origins of the CCP (Chinese Communist Party) virus or face a series of punitive measures.

“The CCP has lied repeatedly about the origins of this pandemic, blocked access to important records from the Wuhan Institute of Virology, and corrupted the World Health Organization. This is unacceptable,” Gallagher said in a statement.

As questions have swirled about the origins of the CCP virus, the Wuhan Institute of Virology, which studied coronaviruses and where scientists carried out research that involved boosting the virulence of some viruses, has refused to share its raw data, safety logs, and lab records about its work on coronaviruses in bats.

And while a report from the World Health Organization (WHO) published in March concluded that the CCP virus likely spread to people through an unknown animal, WHO Director-General Tedros Adhanom Ghebreyesus said at the time that the mission to study the origin of the virus didn’t adequately analyze other theories.

More than a dozen nations, including the United States and the European Union, have raised concerns about the phase one WHO study into the origin of the virus, pointing to the report’s significant delay and China’s refusal to share crucial raw data. The United States in May urged the WHO to launch a fresh probe into the origins of the virus, highlighting the need for transparency.

At the same time, a pair of scientists argued in a June 6 op-ed in The Wall Street Journal that there exists “damning” scientific evidence supporting the theory that the CCP virus didn’t make a natural jump from animal to human, but was bio-engineered in a Chinese lab.

The CCP has denied any connection between the virus’s origin and the Wuhan lab, and has pushed the “natural zoonotic” hypothesis—that the virus was transmitted to humans from an animal host. The Chinese regime has also claimed that the virus originated outside of China. At a May 24 press briefing, Foreign Ministry spokesman Zhao Lijian accused the United States of releasing the virus from the Fort Detrick military base in Maryland.

Rubio said in a statement: “The Chinese Communist Party does not want a full, forensic investigation into the origins of COVID-19. If they did, it would have happened at some point during the last 18 months. Instead of hoping the Chinese authorities will suddenly cooperate, the United States needs to compel them to cooperate.”

Rubio and Gallagher’s bill calls for transparent international forensic investigation access to the Wuhan Institute of Virology within 90 days of the bill’s enactment. Failure to allow such a probe would authorize sanctions on the leadership at the Chinese Academy of Sciences (CAS), including its more than 100 affiliated institutes and laboratories, 13 local branches, and two universities.

The bill also prohibits U.S. federal research dollars from funding CAS-affiliated institutions and more than 430 science and technology enterprises created by the CAS or founded with CAS investment.

The sanctions listed in the bill include blocking assets and denying visas.