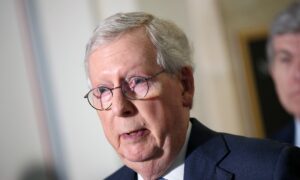 Negotiations on a major infrastructure package have hit a snag, Republicans and Democrats said Tuesday.

The bargaining talks “seem to be running into a brick wall,” Senate Majority Leader Chuck Schumer (D-N.Y.) added in a separate briefing.

Sen. Shelley Moore Capito (R-W.Va.), the top Republican on the Senate Committee of Environment and Public Works, was tasked by top Senate Republicans to try to reach a deal with President Joe Biden on infrastructure after the White House unveiled a $2.3 trillion plan and Republicans countered with a $568 billion proposal.

The two sides have since inched closer but are still over $700 billion apart.

“They will have a discussion about what more there is to discuss, I guess, and what the path looks like forward,” White House press secretary Jen Psaki told reporters in Washington.

Barrasso said the GOP wants to focus on actual infrastructure, such as roads, bridges, and airports, while the Biden administration seems set on including items not traditionally included in infrastructure packages, such as money for elder care. The two sides also have differences over whether or not to include tax hikes.

“Republicans have been very clear. We’re not going to raise taxes, and the American people would agree that the last time you ever raise taxes is when you’re coming out of, still trying to recover from a pandemic,” he said.

As negotiations between Capito and Biden stall, a different group headed by Sens. Kyrsten Sinema (D-Ariz.) and Rob Portman (R-Ohio) are working on a proposal, Schumer said.

“That’s good, but that’s not going to be the only answer. We all know as a caucus, we will not be able to do all the things that the country needs in a bipartisan way, and so at the same time we are pursuing the pursuit of reconciliation,” he said.

Democrats used reconciliation, a budget tool, to ram through a COVID-19 relief package earlier this year with no Republican support. Democrats hold a slim majority in the 50-50 Senate through Vice President Kamala Harris’s ability to cast tie-breaking votes in her capacity as president of the upper chamber.

Sen. Joe Manchin (D-W.Va.) has said he does not at this time support using reconciliation to push through infrastructure legislation. Unless a Republican switched sides, which is unlikely, Democrats need Manchin’s vote.

Portman told reporters in Washington that he was not able to put a price tag on the proposal he’s working on.

“We’ll see. I’m still promoting the other talks,” he said, referring to the Capito-Biden negotiations. “We’re working with Sen. Capito and exchanging information and trying to make that as successful as possible.”

Biden planned to speak to other senators on Tuesday afternoon who are engaged in bipartisan talks on infrastructure, according to the White House.

“We are encouraged by these discussions and see them as an additional viable path forward,” Psaki said.

“The president wouldn’t be spending his time engaging in hours of discussions with Republicans if he didn’t think something could come from it,” she added later.

Biden’s only remaining “lines in the sand” are inaction and raising taxes on Americans making $400,000 or more a year.

Sens. Lisa Murkowski (R-Alaska) and Mitt Romney (R-Utah) are part of the Sinema-led group. Romney said they’re “nailing down exactly where we are” before taking a proposal to a wider, 20-member group that contains both Democrats and Republicans.

“We’ve been, at this stage, waiting in the wings,” he told reporters on Capitol Hill. “If there’s interest in our proposal and how we might decide when to come forward is undecided at this point.”