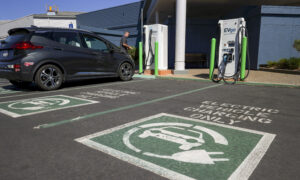 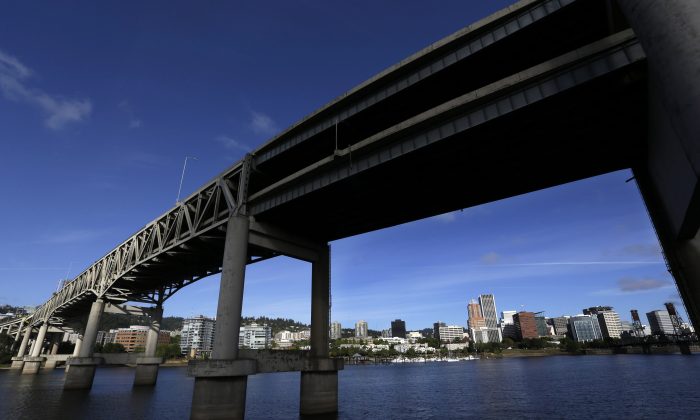 Downtown Portland, Ore., is visible under the Interstate-5 Marquam Bridge on the Willamette River on Aug. 4, 2015. (Don Ryan/AP Photo)
Republicans

Republicans are wary of the Democrats’ soon-to-be-revealed infrastructure proposal, saying their party wants the package to focus on core infrastructure needs like roads and bridges and how it can be paid for, not be overrun with elements from “The Green New Deal” or President Joe Biden’s climate change agenda.

Press secretary Jen Psaki told Fox News on Sunday that the next stage of Biden’s pandemic recovery is infrastructure, which the president will detail in a proposal this week.

“What the American people will hear from him this week is part of his plan, the first step of his plan toward recovery, which will include an investment in infrastructure, we shouldn’t be 13th in the world. I don’t think anyone believes that the wealthiest, most innovative country in the world,” Psaki said.

Psaki might be referring to assessments by organizations like the American Society of Civil Engineers, who in their 2017 report card gave the U.S. infrastructure an overall “D+”.

The administration has indicated that the infrastructure recovery package will focus on Biden’s climate change agenda, which proposes significantly reducing carbon emissions and addressing environmental “injustice.” The New York Times reported that the bill would cost upwards of $3 trillion.

Sen. Ed Markey (D-Mass.), one of the original sponsors of The Green New Deal, said the soon to be revealed infrastructure package encompasses many of the goals from the deal.

“It’s a way of accomplishing many of the goals of the Green New Deal,” Markey told the Boston Globe, saying he will urge other lawmakers “to go big and bold to match the urgency of the moment.”

“The lesson I learned was that climate needs to inform and be included in every legislative package, not separate and put into a silo,” Markey added.

Last week, Republicans indicated their opposition to the Biden administration’s infrastructure proposal’s cost and cautioned against a plan that is removed from core transportation priorities but instead is focused on the climate change and social justice agenda.

Rep. John Katko (R-N.Y.) told Buttigieg the infrastructure package must be supported by both parties.

“I just came back from a motorcycle ride—my first of the season—and I can reaffirm for you the obvious that our roads and bridges in this country suck. They need a lot of work,” Katko said. “And we can’t do it in a partisan manner because it’s too big an issue for us.”

Freshman Congresswoman Nicole Malliotakis (R-N.Y.) summarized what she felt are the GOP priorities for infrastructure.

“From Republicans’ perspective, we’re concerned about what exactly do they mean by infrastructure, because we do not want this to become a climate change bill. We know Alexandria Ocasio Cortez is pushing to make this a Green New Deal, and how much is this going to cost and how are we going to pay for it? I think those are our main concerns,” she told Fox News on March 25.

The recent $1.9 trillion rescue package was passed along party lines by the Democrat-led Congress. Psaki was questioned about Biden’s commitment to getting Republican support for the next package. The press secretary pushed back and said GOP members should support the Biden proposal if they care about American infrastructure, without saying if Biden is willing to compromise on some of his priorities.

“Well, we’re not quite at a legislative strategy yet … but I will say that I don’t think Republicans in this country think we should be 13th in the world as it relates to infrastructure. Roads, railways, rebuilding them, that’s not a partisan issue,” said Psaki. She said that Democrats are still working out the price tag, but “he’s going to introduce some ways to pay for that and he’s eager to hear ideas from both parties as well.”

Meanwhile, Tina Fordham, Head of Avonhurst Global Political Strategy told CNBC on Monday that Biden could pass the infrastructure legislation without Republican support because he has wide public support.

“He has a window to do something big, to push forward on his build back better agenda and to really rectify what is chronic underinvestment both in infrastructure and in the social safety net in the United States, going back decades,” said Fordham. “But I think the point is that they can do this without Republican support if they need to.”