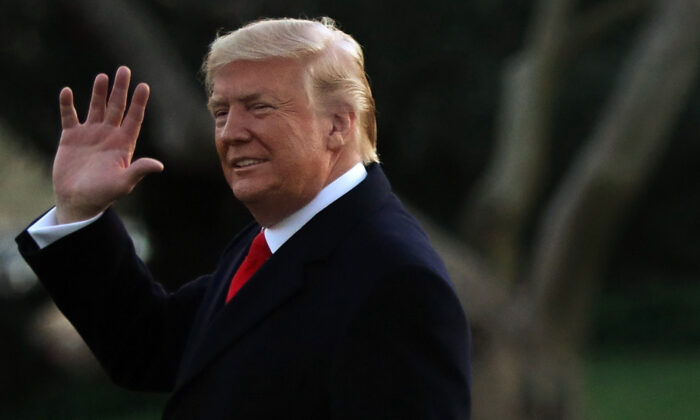 President Donald Trump walks towards Marine One on the South Lawn of the White House in Washington while departing for a “Merry Christmas” campaign rally in Battle Creek, Michigan on December 18, 2019. (Alex Wong/Getty Images)
By Jack Phillips

House Democrats are preparing to make President Donald Trump the third president in U.S. history to get impeached, but Republicans and Trump may be the ones who ultimately cash in ahead of the 2020 elections.

The Republican National Committee’s (RNC) deputy chief of staff, Mike Reed, told Axios that “voters are consistently expressing how they want Washington to focus on real issues,” claiming that more than 600,000 new voters have been added since impeachment began.

And in the past week, the Trump campaign and RNC took in a combined $10 million in small-dollar donations as the House Judiciary Committee passed two articles of impeachment, the report said, which added that that in late September, in the three days after House Speaker Nancy Pelosi (D-Calif.) announced the initial impeachment inquiry into Trump, about $15 million was raised.

In the 24 hours since news of Nancy Pelosi’s impeachment announcement, @realDonaldTrump’s campaign & @GOP have BLOWN OUT fundraising!

Huge groundswell of support leading to Trump landslide in 2020!

An official also said that about a quarter of Trump rally registrants have been self-described Democrats or independents since the inquiry started.

Democrats haven’t released specific fundraising totals since the inquiry was launched. The Democratic Congressional Campaign Committee said it doesn’t have dollar or donor figures to share about impeachment, according to the Axios report.

The Center for Responsive Politics’ Open Secrets website in mid-October noted that the RNC and Trump’s campaign have raised “a record-breaking $334 million to advance GOP campaigns nationwide.” Meanwhile, the Democratic National Committee (DNC) has lagged “far behind in its lackluster fundraising efforts, with $8.6 million on hand through the end of September. Falling short in campaign funds, the committee is limited in its ability to help Democratic candidates ahead of 2020.”

“The RNC entered September with $53.8 million on hand and ended the month with $59.2 million in the bank. That’s more than twice as much money as it had at the beginning of the year and far more than the $19.4 million it had at this point in 2015,” according to the website.

On Wednesday, the House of Representatives began its debate and will hold a vote on the two articles of impeachment against President Donald Trump, arising out of a July conversation he had with Ukraine.

This week, a number of Democrats from districts that Trump carried in 2016 have signaled they would vote in favor of the articles of impeachment, essentially giving House Democrats the 218-vote threshold they need to pass articles of impeachment. The House requires a simple majority vote, but when the two articles reach the Senate, they need a 67-vote minimum. Congressional officials on both sides of the political spectrum have noted that it’s extremely unlikely for Trump to get removed from office. No president in history has ever been convicted by the Senate.