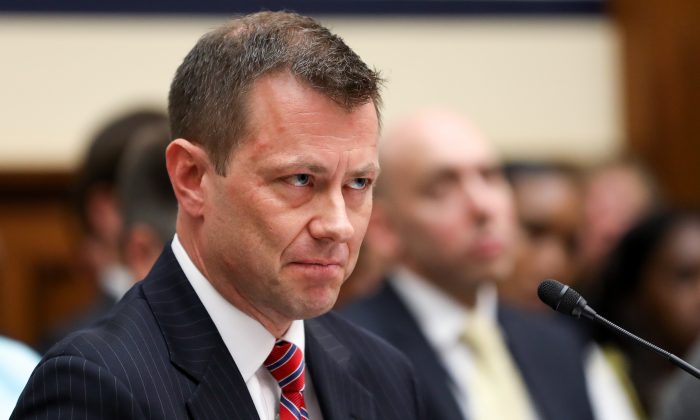 FBI Deputy Assistant Director Peter Strzok testifies at the Committee on the Judiciary and Committee on Oversight and Government Reform Joint Hearing on, “Oversight of FBI and DOJ Actions Surrounding the 2016 Election" in Washington on July 12, 2018. (Samira Bouaou/The Epoch Times)
Politics

Republicans spent most of the session spotlighting Strzok’s bias against President Donald Trump and toward former candidate Hillary Clinton. That bias was revealed in thousands of text messages Strzok exchanged with his mistress, FBI attorney Lisa Page.

Strzok’s main line of defense was to draw a distinction between “bias” and “personal political opinion.” None of the Republicans accepted that explanation. Democrats used their time to praise Strzok, to question him about past cases, and to criticize the Trump administration. One Democrat told Strzok he deserved a Purple Heart.

Strzok refused to answer basic questions about the roots of the counterintelligence probe of the Trump campaign, citing advice from FBI lawyers. Goodlatte reminded Strzok that refusing to answer questions can lead to criminal charges and threatened to start contempt proceedings after the hearing.

During a brief recess, the FBI attempted to de-escalate the situation, telling chairmen of the House Judiciary and Government Oversight and Reform committees that Strzok would answer the question first brought by Rep. Trey Gowdy (R-S.C.).

“Agent Strzok, between July 31, 2016, and August 6, 2016, how many witness interviews did you conduct as part of the Russian-Trump campaign alleged collusion investigation?” Gowdy asked again after the recess.

“I don’t recall and I’d have to check the case file,” Strzok replied.

“We waited all that time for that answer?” Gowdy asked.

Gowdy’s other questions lined up the timing of Strzok’s text messages with the stages of the investigations that Strzok played a key role in. Strzok led the investigation into Clinton’s use of a private email server and the counterintelligence probe of alleged ties between the Trump campaign and Russia.

Though Strzok dodged the questions, Gowdy pointed out that Strzok had discussed the impeachment of Trump on the first week of his tenure on special counsel Robert Mueller’s investigation of Russia’s meddling in the 2016 election.

“When you are prejudging not just a result but a punishment, which impeachment is,” Gowdy said, “when you are prejudging the conviction and the sentencing when you have not conducted a single solitary interview, I’m sorry, agent Strzok, but that is letting bias impact your professional judgment.”

“I never prejudged anything, not in this case, not in any others,” Strzok responded.

Strzok had also texted Page that Clinton should win the election “100,000,000 to 0” while investigating her use of a private email server and before interviewing 30 witnesses on the case, including Clinton herself.

The agent also vowed to “stop” Trump from becoming president one week after beginning to investigate the Trump campaign in August 2016 and before interviewing any witnesses, Gowdy noted.

In another notable exchange, Rep. Jim Jordan (R-Ohio) questioned Strzok about an email he sent about the publication of the infamous anti-Trump dossier by Buzzfeed.

In the email to several top FBI officials with the subject line “Buzzfeed is about to publish the dossier,” Strzok wrote, “Comparing now this set is only identical to what McCain had. It has differences from what was given to us by Corn and Simpson.”

Strzok refused to answer a question asking who Corn and Simpson were, though the last names likely refer to Glenn Simpson, the co-founder of Fusion GPS, and David Corn, the Washington bureau chief of Mother Jones magazine. Fusion GPS is the firm that hired former British spy Christopher Steele to compile the anti-Trump dossier. Mother Jones was the first to report on the document.

Strzok’s email contradicts testimony Simpson gave to Congress. Simpson said he had never approached the FBI or spoken to anyone in the agency about the dossier.

The email shows that the bureau fielded several copies of the dossier from people with a known bias against Trump or in favor of Clinton. The dossier was paid for by Clinton’s campaign and the Democratic National Committee and composed by Steele, who also admitted having an animus against Trump.

The contents of the dossier remain unverified after almost two years of scrutiny by the media, Congress, and the intelligence community.

At the most heated point of the hearing, Rep. Louie Gohmert (R-Texas) asked Strzok about his meeting with a team of then-Intelligence Community Inspector General (ICIG) Charles McCullough.

Gohmert said that an investigator from McCullough’s team briefed Strzok and several FBI officials about a forensic analysis by the ICIG. The analysis uncovered an anomaly in Clinton’s emails showing that virtually every email she sent was forwarded to an unauthorized foreign entity. Gohmert said that Strzok ignored the briefing and never followed up on the lead.

“You did nothing more than nod and shake the man’s hand,” Gohmert said. “You didn’t seem to be all that concerned about our national integrity of our national election when it was involving Hillary Clinton.”

Gohmert also said that Justice Department Inspector General Michael Horowitz was contacted by someone four times about the same finding but never returned the call. Horowitz issued a report last month showing that though Strzok’s bias cast a cloud over the email investigation, there was no evidence that the bias impacted Strzok’s investigative decisions.

Gohmert went on to accuse Strzok of lying and added a personal barb that led to an outcry from Democrats.

“It is a disgrace what this man has done to our justice system,” Gohmert said. “I’ve talked to FBI agents around the country. You’ve embarrassed them. You’ve embarrassed yourself. And I can’t help but wonder when I see you, looking there with a little smirk, how many times did you look so innocent into your wife’s eyes and lie to her about Lisa Page.”