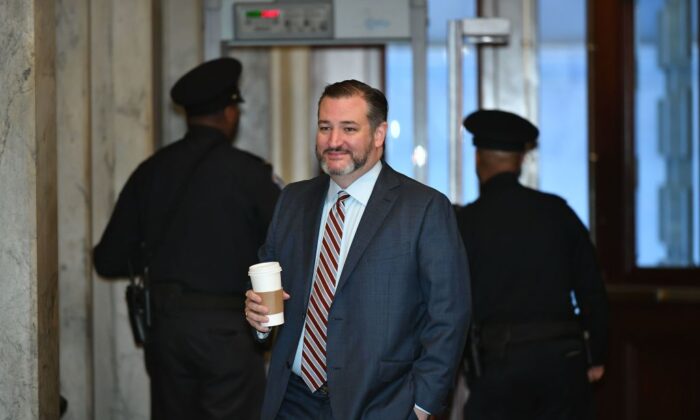 Sen. Ted Cruz (R-Texas) arrives for the impeachment trial of US President Donald Trump at the US Capitol in Washington on Jan. 31, 2020. (Mandel Ngan/AFP via Getty Images)
Politics

Lawmakers in Congress who aren’t known to agree on much of anything united in condemning retail stock investment app Robinhood on Jan. 28, after the company blocked users of the app from buying stocks of companies such as GameStop that were soaring in value after individual investors banded together to squeeze Wall Street hedge funds.

“This is unacceptable. We now need to know more about @RobinhoodApp’s decision to block retail investors from purchasing stock while hedge funds are freely able to trade the stock as they see fit,” Rep. Alexandria Ocasio-Cortez (D-N.Y.) wrote on Twitter.

Cruz and Ocasio-Cortez are representative of the populist segments of their political parties and espouse clashing political views. The unity was shortlived. Ocasio-Cortez issued a tweet in response to Cruz’s message, writing that he should resign from his post because he voted to affirm an objection to the counting of presidential electors on Jan. 6.

Others from opposing sides of the political spectrum, including Donald Trump Jr., son of former President Donald Trump, and Rep. Rashida Tlaib (D-Mich.) chimed in.

This is beyond absurd,” Tlaib wrote on Twitter. “They’re blocking the ability to trade to protect Wall St. hedge funds, stealing millions of dollars from their users to protect people who’ve used the stock market as a casino for decades.”

“It took less than a day for big tech, big government and the corporate media to spring into action and begin colluding to protect their hedge fund buddies on Wall Street,” Trump Jr. wrote. “This is what a rigged system looks like, folks!”

A sizable group of small investors has threatened to bankrupt Wall Street hedge funds that have sought to profit from the downfall of GameStop, a brick and mortar videogame retailer. The investors have organized online to buy GameStop’s stock, forcing billions in losses on the establishment players that had bet on the company’s failure.

The exact origin of the phenomenon is hard to pinpoint, but some have attributed it to an anonymous member of the Reddit forum called Wall Street Bets. The forum sports over 4.8 million members and focuses on retail investment, meaning investment by individuals, typically of small sums, into stocks and bonds. Members of the forum noticed that Melvin Capital Management, a hedge fund worth reportedly over $12 billion, was holding a massive short position in GameStop—the company was betting more than $55 million on GameStop’s stock sinking, according to startup investor Shaan Puri. Members of the forum rallied their ranks to bet against Melvin by buying GameStop shares.