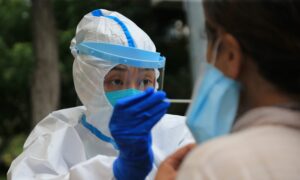 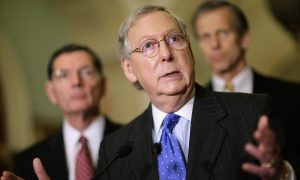 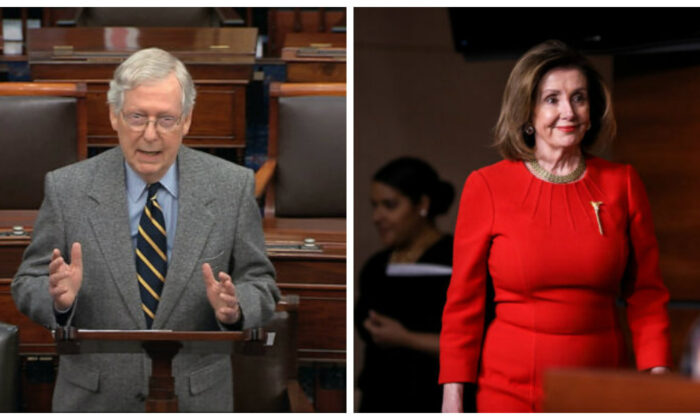 Top Republican and Democratic leaders are at an impasse over how to handle the next piece of CCP virus legislation, with both sides accusing one another of stalling—even as federal unemployment benefits are slated to expire at the end of the month.

In defense of the GOP’s HEALS Act on the floor of the Senate, Senate Majority Leader Mitch McConnell (R-Ky.) described the measure as “a more-than-fair” bill that could see bipartisan support.

“The only reason I can see that Speaker Pelosi and the Democratic leader would sabotage negotiations is if, as some concluded when they killed police reform in June, they actually think bipartisan progress for the country would hurt their own political chances,” he said.

He also claimed that House Speaker Nancy Pelosi (D-Calif.) only wants to continue the $600-per-week expanded unemployment benefits. Under the House Democrats’ HEROES Act, passed in May, the program would end in January.

Democrats, he said on the floor of the Senate, are arguing for “no money for schools, no money for households, no second round of the PPP, no more money for hospitals or testing, nothing at all unless we continue to pay people more not to work.”

While Pelosi and Senate Minority Leader Chuck Schumer (D-N.Y.) have said the GOP is stalling, McConnell accused the opposition of doing the same.

“Yesterday, after putting the Senate on ‘pause’ for three months, and after months of blocking nearly every Democratic attempt to pass legislation related to coronavirus, Senate Republicans finally revealed their long-overdue proposal for the next phase of COVID relief,” Schumer said on the Senate floor on July 28.

Pelosi alleged that it’s the GOP that is in disarray and failing to act.

“We have passed our bill, the appropriate thing for the Senate to do is to pass a bill and then we can negotiate with them, but they can’t even get a bill passed on their side, even if it just took 51 votes, they’re in disarray,” she said in an interview on July 29.

“Forgetting the 60 votes, I think it’s very hard for them to get 51 votes for the proposal that they’ve put forward.”

Republicans’ measure would provide $200 per week in federal unemployment benefits before switching to account for 70 percent of recipients’ previous wage. Pelosi and Democrats have previously pushed back against this.

But McConnell asserted that after “weeks of talk from Democrats about the urgency of the issue. Weeks of Democrats thundering that people will be hurt if we don’t act. But then, when it’s time to actually make a law, Democrats would rather keep political issues alive than find bipartisan ways to resolve them.”

The CARES Act, passed in March, included the expanded unemployment benefits, more money for small businesses via the Payment Protection Program (PPD), direct stimulus checks of up to $1,200, and other measures. Democrats, in their HEROES Act, have sought to obtain more funding for local and state governments, while the GOP’s HEALS Act would omit that measure.

President Donald Trump, in remarks on July 28 and 29, signaled that Democrats and Republicans are far apart in coming to an agreement.

“We ought to work on the evictions so that people don’t get evicted, to work on the payments to the people and the rest of it,” Trump said to reporters on July 29.

Treasury Secretary Steven Mnuchin told reporters that both sides of the aisle in Congress are “very far apart,” saying Republicans and Democrats should opt to pass a short-term extension of the unemployment benefits and eviction protections.

Pelosi, however, has rejected the idea and said the bill shouldn’t be passed in a piecemeal manner.