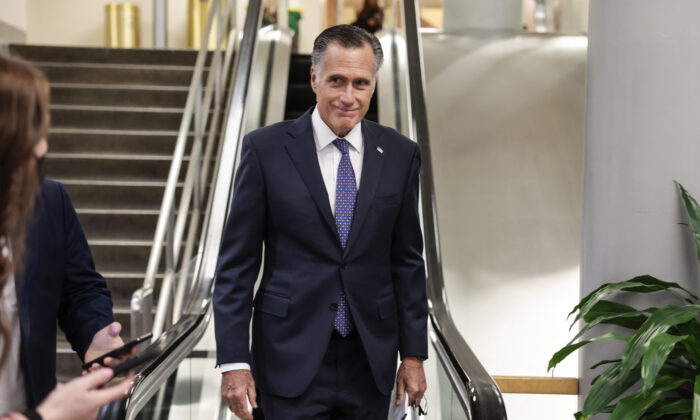 Sen. Mitt Romney (R-Utah) walks through the Senate subway during a vote on Capitol Hill in Washington, on Feb. 16, 2022. (Anna Moneymaker/Getty Images)
Republicans

Republican members of Congress on Tuesday demanded to know the individual who apparently leaked the draft Supreme Court ruling to overturn Roe v. Wade, describing it as a violation of the law and a breach of the high court’s process.

“The breach of the Court’s deliberative process … is an appalling affront against a critical institution and should be fully investigated and those responsible should be punished,” said Sen. Mitt Romney (R-Utah) in a statement, adding that he supports what was written in the leaked draft.

“This entire kerfuffle has been brought about as a result of an unscrupulous person trying to subvert 235 years of tradition, trying to subvert the way the Supreme Court operates,” Sen. Mike Lee (R-Utah) told Fox News in an interview on Tuesday, releasing a statement Monday night that the Supreme Court decision is “well-reasoned” but described the leak as “damaging” and “despicable.”

“I have questions about whether that person should ever be allowed to practice law. That something that will be worked out in due time. These are small circles. As a former Supreme Court clerk I can tell you there are very few people in the entire building who had access to the opinion,” Lee added in his Fox interview.

And Sen. Marsha Blackburn (R-Tenn.) wrote in a Twitter post that she has “no doubt” that Supreme Court Chief Justice John Roberts will attempt to “root out the radical activist that betrayed the sacred tradition of the court,” while adding that the “leaker must be immediately removed from their position and exiled from the legal community.”

A decision to overrule Roe v. Wade would lead to abortion bans in roughly half the states and could have huge ramifications for the 2022 elections. But it’s unclear if the draft represents the court’s final word on the matter—opinions often change in ways big and small in the drafting process.

“Roe was egregiously wrong from the start,” the draft opinion said. The draft was signed by Justice Samuel Alito, who was appointed by former President George W. Bush. The draft opinion in effect states there is no constitutional right to abortion services and would allow individual states to more heavily regulate or outright ban the procedure.

The Epoch Times could not immediately verify the authenticity of the draft report, which was published late Monday night by Politico.

“We cannot allow our decisions to be affected by any extraneous influences such as concern about the public’s reaction to our work,” Alito also allegedly wrote in the draft opinion, according to Politico.

A Supreme Court spokeswoman told AP the court had no comment. The Epoch Times has contacted the court.