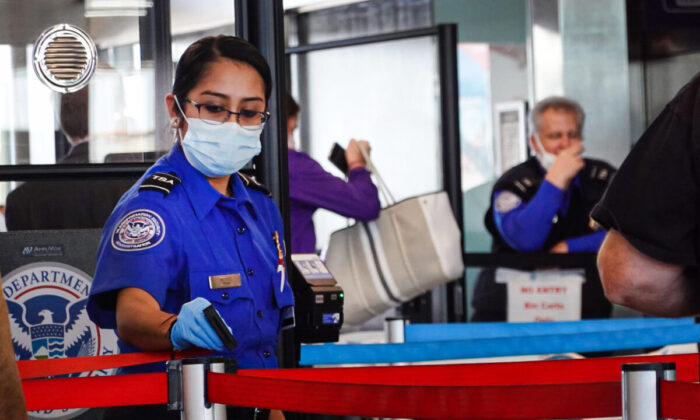 Senate Republicans are demanding answers from one of the top officials in President Joe Biden’s administration after the Transportation Security Administration (TSA) acknowledged that it allows illegal immigrants to use arrest warrants as a form of identification to fly inside the United States.

The revelation is “alarming” and presents a potentially “serious threat to our nation’s homeland security,” Sen. Thom Tillis (R-N.C.) and nine other senators wrote in a letter to Department of Homeland Security (DHS) Secretary Alejandro Mayorkas that was obtained by The Epoch Times.

TSA, which helps secure U.S. airports, confirmed to The Epoch Times recently that agents accept some DHS-issued forms if noncitizens don’t have identification. That includes Immigration and Customs Enforcement (ICE) form I-200, or a warrant for the arrest of an alien.

That form states that there’s probable cause to believe a certain alien is removable from the United States and commands immigration officers to arrest and take into custody the named alien for deportation proceedings under the Immigration and Nationality Act.

“By the plain text of these documents, the only flights these dangerous, criminal illegal immigrants should be boarding are those returning them to their home country,” the letter reads.

They demanded answers to a set of questions by Feb. 25, including when the form was first deemed an acceptable form of identification, whether ICE was consulted before the decision was made, and why the aliens are being allowed to fly rather than being deported.

A TSA official told The Epoch Times on Jan. 23 that the agency has been accepting form I-200 for nearly as long as the agency has been in existence. The official said they believed TSA agents didn’t have the authority to arrest illegal aliens. ICE, when asked whether non-ICE law enforcement agents could enforce the arrest warrants, refused to answer the question.

The Biden administration has been flying illegal aliens across the United States, including to suburban airports, since taking office. Under President Joe Biden, a new record for arrests at the southern border was set, and overwhelmed immigration officers have released a significant number of the apprehended immigrants into the country, including roughly 78,000 of them without court dates.

The recent admission by TSA also sparked the creation of new legislation that would bar TSA from accepting an arrest warrant as identification for commercial flights.

“An illegal immigrant who commits a crime should be arrested and brought before a judge. The Biden Administration is instead putting our national security and American families at risk by allowing them to fly on U.S. airlines,” Gooden said in a statement.

“Illegal immigrants should not be able to board flights using warrants for their arrest or deportation, and it is ridiculous that the Biden Administration is allowing this to happen. Rep. Gooden and I are working on legislation that will put a stop to this insane practice and secure air travel in this country,” Rubio added.