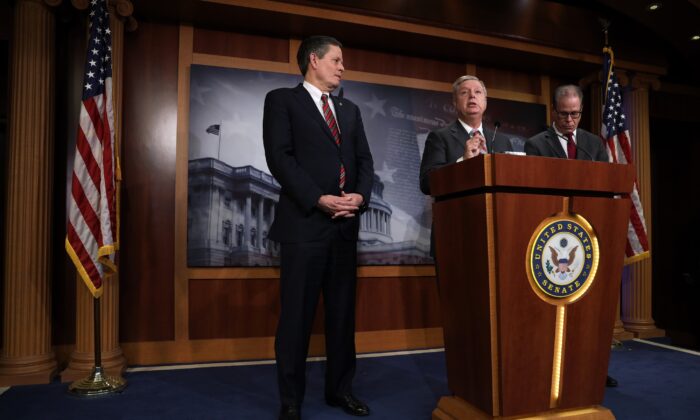 Prominent Republicans are advising the Department of Justice (DOJ) to not pursue a criminal investigation of former President Donald Trump after the Jan. 6 Committee announced its intention to launch such a probe. Republicans say the move will focus on the wrong issues and will come off as a “politically driven” decision.

In a March 2 legal brief, the Jan. 6 Committee stated that because of his efforts to challenge the results of the 2020 election—which many have argued was rife with voter fraud—Trump “may have engaged in criminal and/or fraudulent acts.”

Several Democrats have pushed for a DOJ investigation of Trump, frustrated that Attorney General Merrick Garland hasn’t turned his substantial power toward an in-depth investigation of the Jan. 6 “Stop the Steal” rally and the events leading up to it.

However, Garland, perhaps concerned that an investigation would appear too political in the wake of his highly controversial decision to initiate criminal proceedings against former White House adviser Steve Bannon, has seemingly been hesitant to carry out an investigation of Trump.

In mid-December 2021, the Jan. 6 Committee also recommended a contempt of Congress charge against Trump chief of staff Mark Meadows. Although the House voted to refer the charge to the Department of Justice, Garland has yet to make a decision on whether to pursue another criminal indictment.

Rep. Adam Schiff (D-Calif.), a member of the Democrat-dominated committee, laughed when he was asked whether a probe into Trump by the Jan. 6 Committee could interfere with a potential DOJ investigation.

“I honestly wish we had more concern about that,” Schiff told NBC in an interview. “Because it would mean the Department of Justice was looking at a broader range of potential violations of law than I have any indication may be happening.”

Republicans, on the other hand, are advising Garland against carrying out a criminal investigation of Trump.

Sen. Mike Braun (R-Ind.) said such an effort “would probably have as much political taint on it as you can get.”

During his State of the Union Address, President Joe Biden sought to reframe his administration as a centrist one. He pushed for several of Trump’s key policies, including securing the southern border, keeping jobs and industries in the United States, and protecting the police from far-left efforts to defund or abolish them.

Braun suggested that if Biden uses his DOJ to investigate his former presidential rival, it will destroy any notion of centrism from the Biden White House.

“At least half the country would say it’s all politically motivated,” Braun said.

Sen. Thom Tillis (R-N.C.) also criticized Speaker of the House Nancy Pelosi (D-Calif.) for her previous decision to block Republican picks from the committee, a decision Tillis implied made the committee far more partisan in the eyes of Americans.

Pelosi refused to admit House Minority Leader Kevin McCarthy’s (R-Calif.) picks—Reps. Jim Jordan (R-Ohio) and Jim Banks (R-Ind.)—to the committee. Rather, she appointed Reps. Adam Kinzinger (R-Ill.) and Liz Cheney (R-Wyo.), who have long been outspoken critics of Trump and have since been censured by the Republican National Committee for their role on the commission.

“I don’t mind looking into the events,” Tillis said. “But I think that Speaker Pelosi did not do the process justice by the way the members were ultimately seated. It’s going to be perceived as political.

“Everybody is going to perceive the referral as a conviction on one side and they’re going to view it as the continuation of a witch hunt on the other side. The bar that the House committee has is far lower than anything that would ultimately result in moving forward with a federal investigation and a conviction.”

Sen. Lindsey Graham (R-S.C.), a former Trump rival who has become closer to the president in recent years, expressed a similar sentiment in a statement to The Hill.

“I don’t see anything coming out of this committee not tainted by politics,” Graham said.

In the past, the committee has targeted major Republicans, such as McCarthy, Jordan, and Rep. Scott Perry (R-Pa.), who refused to cooperate with the committee.

The string of decisions to subpoena Republicans without questioning Democrat leaders such as Pelosi, who had a large influence in preparing Capitol security ahead of the rally, has heightened allegations of partisan behavior within the committee.

In its March 2 legal brief, the committee indicated that it will be recommending criminal charges against Trump.

Ultimately, however, the decision to open a DOJ investigation lies squarely with the attorney general, although Biden could advise him to pursue or not pursue an indictment. If Trump were to be indicted, it would mark the first time in U.S. history that a president has faced criminal proceedings.

Although other presidents have been impeached for alleged crimes or misconduct—a process that resides with the legislature rather than with the judiciary—no president has been indicted or convicted in civil court.

During the Watergate scandal, many opponents of President Richard Nixon pushed to have him indicted. Ultimately, however, Nixon didn’t face criminal charges and was allowed to leave the Oval Office without an indictment.

Initiating such proceedings now against Trump would mark a major departure for the judicial system and may kick off a sharp political battle between his supporters and his opponents.