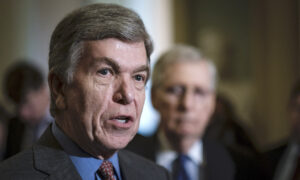 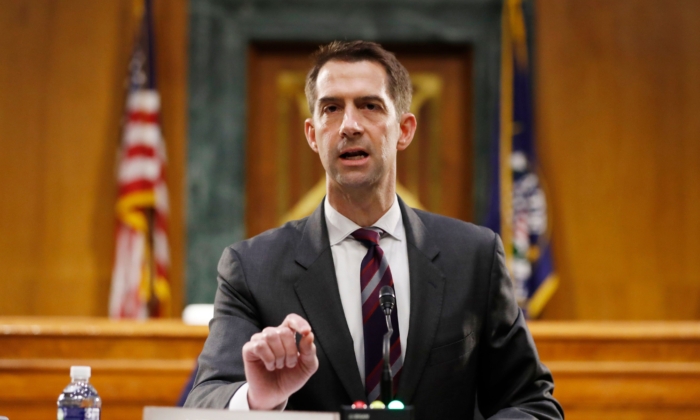 Sen. Tom Cotton (R-Ark.) speaks during a hearing in Washington on May 5, 2020. (Andrew Harnik/Pool/AFP via Getty Images)
Republicans

Members of the GOP in the House and Senate on Friday harshly criticized President Joe Biden for creating a commission tasked with exploring reforms to the Supreme Court.

“Today’s announcement is a direct assault on our nation’s independent judiciary and yet another sign of the far left’s influence over the Biden administration,” Senate Minority Leader Mitch McConnell (R-Ky.) said in a statement.

“The president spent most of his campaign playing coy on the issue, but has now admitted from the safety of a four-year term that he views the judiciary as ‘out of whack,'” McConnell said. “This faux-academic study of a non-existent problem fits squarely within liberals’ years-long campaign to politicize the court, intimidate its members and subvert its independence.”

Biden signed an executive order on Friday establishing the Presidential Commission on the Supreme Court of the United States. The commission is tasked with producing a report which includes “an analysis of the principal arguments in the contemporary public debate for and against Supreme Court reform, including an appraisal of the merits and legality of particular reform proposals.”

Republicans characterized the move as a preamble to the Democrats’ effort to add seats to the Supreme Court and erase the conservative majority established on the bench with three appointments by former President Donald Trump. The practice is often referred to as “court-packing.”

“I’m sure this commission of *26* legal experts will produce a fascinating law review article,” Sen. Tom Cotton (R-Ark.) wrote on Twitter. “But whatever the commission says, the truth is that Democrats want to pack the Court to implement a leftist agenda that Americans don’t want.”

The size of the Supreme Court bench has varied over the years. The size of the bench grew to 10 members, the highest in U.S. history, in 1863. The number returned to nine justices in 1869 and has remained so since.

“In 1983, Joe Biden called President Roosevelt’s effort to pack the #SCOTUS a ‘boneheaded idea’ and ‘a terrible, terrible mistake to make’ He was right back then. And it would be a terrible boneheaded mistake today,” Sen. Mike Lee (R-Utah) wrote on Twitter, using an acronym for the Supreme Court of the United States.

“The American people deserve a straight answer and if you haven’t figured it out yet, the straight answer is that they are going to pack the Supreme Court,” Pence said at the time.

Biden created the SCOTUS commission amid an ongoing discussion among Senate Democrats about ending the legislative filibuster, a distinguishing feature of the U.S. Senate that promotes bipartisanship. Both sides have weakened the filibuster by doing away with the practice for presidential nominees.

“My Democrat friends decry the last president for weakening our institutions with his words and behavior but they now cheer the effort to pack the Supreme Court and end the Senate filibuster, which would forever diminish institutions at our Republic’s foundation,” Sen. Mitt Romney (R-Utah) wrote on Twitter.