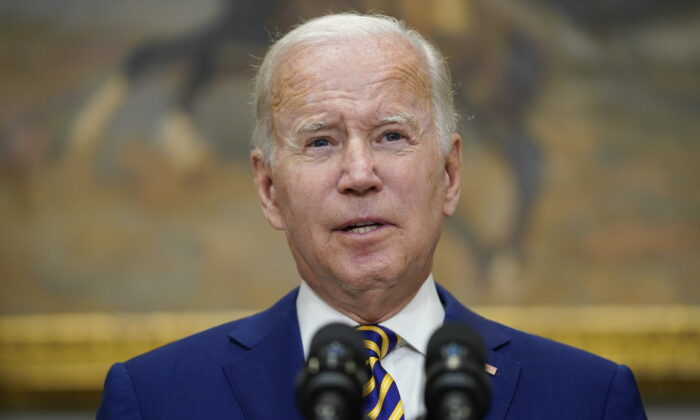 U.S. President Joe Biden’s recent statement that the United States would militarily defend Taiwan from Chinese aggression and the apparent walk back of that statement by the White House has caused frustration and uncertainty among some lawmakers.

When asked during a “60 Minutes” interview whether he would commit U.S. forces to defend Taiwan from an invasion by communist China, the president responded decisively.

“Yes,” Biden said, “if, in fact, there was an unprecedented attack.”

Immediately after Biden’s comment, the program ran a voiceover saying that a White House official said after the interview that “U.S. policy has not changed.” Officially, the United States maintains a policy of strategic ambiguity, in which it won’t say whether U.S. forces would defend Taiwan.

The apparent flip flop caused grief among Republican lawmakers, many of whom desire an end to the U.S. policy of strategic ambiguity.

“I’m wondering what’s going through the big guy’s mind,” Rep. Kevin McCarthy (R-Calif.) said during a Sept. 20 interview on Fox’s “Jesse Watters Primetime.” “He can’t send a clear message. This isn’t the first time he’s done this. Almost every time he’s talked about China and Taiwan, the White House has walked it back.”

Biden’s interview with “60 Minutes” marked the fourth time he said that the United States is committed to defending Taiwan.

He made similar comments during an interview in Tokyo in May 2022, at an October 2021 CNN Town Hall, and during an August 2021 interview with George Stephanopoulos.

“Biden has clearly said on four occasions he will defend Taiwan, but his subordinates on four occasions have clearly contradicted him,” China commentator Gordon Chang wrote on Twitter. “He now has a constitutional obligation to explain to the American people if he is still commander-in-chief and the one making decisions.”

Some lawmakers fear that the frequent commitments to defend Taiwan by Biden and their subsequent denials by the White House will fail to deter China’s ruling communist party from attacking democratic Taiwan, although the effort could be a deliberate attempt to obfuscate the administration’s strategy.

The Chinese Communist Party (CCP), which rules China as a single-party state, claims that Taiwan is a rogue Chinese province that must be united with the mainland. However, Taiwan has never been controlled by the CCP and has been self-governing since 1949.

The United States and China maintain agreements that neither side will attempt to change the status quo by unilaterally pursuing either Taiwanese unification or independence efforts.

“We are not moving,” Biden said during the “60 Minutes” interview. “We are not encouraging their being independent. … That’s [Taiwan’s] decision.”