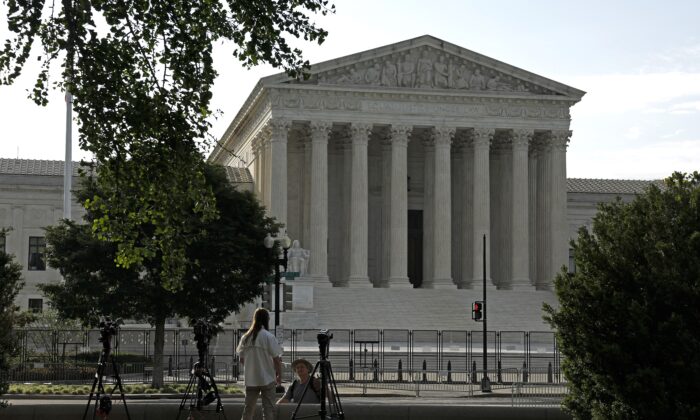 Republicans and Democrats are split over a decision by the Supreme Court (SCOTUS) that greatly limits the reach of the Environmental Protection Agency (EPA) to regulate carbon emissions.

While Republicans have painted the decision as a victory over unelected bureaucrats, Democrats are sounding the alarm about the environmental toll that they say the decision could have.

The Supreme Court ruled 6–3 on June 30 that the Clean Air Act does not give the U.S. Environmental Protection Agency (EPA) widespread power to regulate carbon dioxide emissions, which are considered the cause of global warming under the theory of manmade climate change.

While “capping carbon dioxide emissions at a level that will force a nationwide transition away from the use of coal to generate electricity may be a sensible ‘solution to the crisis of the day,’” Roberts wrote, quoting a 1992 precedent, “it is not plausible that Congress gave EPA the authority to adopt on its own such a regulatory scheme in Section 111(d)” of the Clean Air Act.

“A decision of such magnitude and consequence rests with Congress itself, or an agency acting pursuant to a clear delegation from that representative body,” he wrote.

The decision will have a wide-reaching impact on the EPA’s authority, forcing it to ask Congress for permission to regulate carbon dioxide emissions in the future.

Republicans quickly applauded the decision as a victory over the EPA’s seizure of power outside the scope of congressionally-approved laws and as a victory for American energy.

“I applaud the Supreme Court’s decision to limit the EPA’s powers,” wrote Rep. Andy Biggs (R-Ariz.) on Twitter. “Unelected, climate-crazy bureaucrats don’t get to decide what our laws are. It’s time to unleash American energy.”

Sen. Ted Cruz (R-Texas) also took to Twitter in the aftermath of the decision, which he called “a major victory for limited government.”

“This is a strong rebuke of unelected bureaucrats in the swamp and the administrative state,” Cruz wrote. “We can have a clean environment and affordable energy through innovation and competition, not through executive overreach and burdensome government regulation.”

“This decision confirms Congress, not the EPA, has the authority to create environmental policy. We’ll continue working to protect the environment while making American energy as clean, reliable and affordable as possible,” Barrasso added.

Democrats, however, were less sanguine, and predicted that dire consequences will come from the decision. Coming in the wake of the SCOTUS decision to overturn Roe v. Wade, Democrats were quick to decry the court itself as “radical.”

“Today’s ruling by a radical, pro-pollution Supreme Court strikes a severe blow to the @EPA’s authority to do its duty: to protect the environment,” Speaker of the House Nancy Pelosi (D-Calif.) wrote on Twitter. “In doing so, the Court has bowed to polluters who seek to poison the air our children breathe & the water they drink with impunity. This decision is the latest in the efforts by extremist Republican-appointed Justices to take a wrecking ball to health, liberty & security.

“The Court has acted to erase reproductive health freedom, flood our public places with more deadly weapons & now, to let our planet burn.”

Pelosi added in a separate statement: “As a radical Republican Party and their henchmen on the Supreme Court continue their all-out assault on our rights and freedoms, Democrats will not yield in our fight For The Children, For The Planet and For The People.”

“Our climate crisis is a real and existential threat we need to tackle NOW—and today, the Supreme Court severely limited our ability to do so by stripping away one of EPA’s most critical responsibilities: protecting our environment and public health from greenhouse gas emissions,” Duckworth wrote in a tweet.

“I’m outraged that the Court put business interests above the future of our families and our planet,” she added.

Even former President Barack Obama commented on the decision.

“No challenge poses a greater threat to our future than a changing climate,” Obama wrote on Twitter. “Every day, we’re feeling the impact of climate change, and today’s Supreme Court decision is a major step backward.

“The 6-3 decision strikes a blow to the EPA’s authority to regulate power plant emissions—paving the way to dismantle some of the most impactful provisions of the Clean Air Act and limit our ability to reduce carbon pollution.”