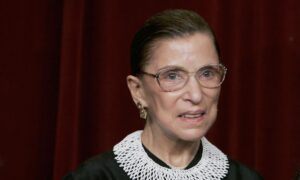 Amy Coney Barrett Honors Justice Ginsburg: 'She Has Won the Admiration of Women Across the Country'
0 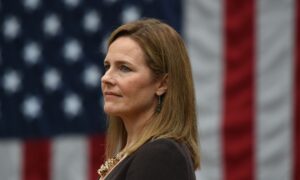 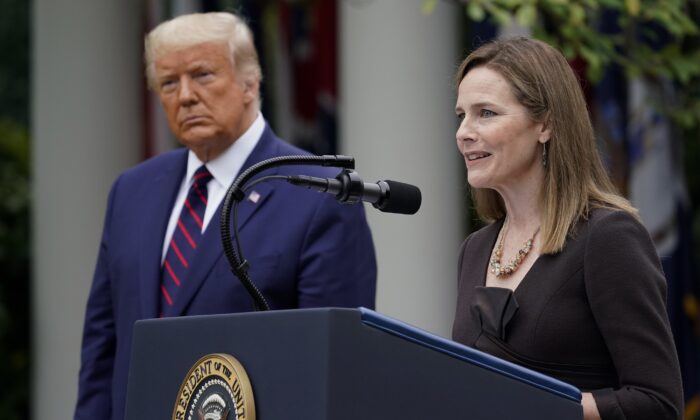 Judge Amy Coney Barrett speaks after President Donald Trump announced Barrett as his nominee to the Supreme Court, in the Rose Garden at the White House in Washington, Sept. 26, 2020. (Alex Brandon/AP Photo)
Politics

Republican lawmakers on Saturday applauded the nomination of Judge Amy Coney Barrett to the Supreme Court.

Many backers highlighted Barrett’s time clerking for late Justice Antonin Scalia as well as her time serving on the U.S. Court of Appeals for the 7th Circuit.

“I am extremely pleased with President Trump’s selection in nominating Judge Barrett to the Supreme Court. From her clerkship for the late Justice Scalia to her tenure on the 7th Circuit, Judge Barrett has had a distinguished career and has proven her commitment to the rule of law,” Sen. Richard Shelby (R-Ala.) said in a statement.

“Judge Barrett is a well-qualified, highly respected nominee, and that’s why the Senate previously confirmed her. She is also a person who is strong in her faith,” Sen. Marco Rubio (R-Fla.) said in a statement.

“We move forward on this nomination knowing that the President has picked a highly qualified individual who will serve our nation well on the highest court in the land,” added the senator, who has said that the GOP has enough votes to confirm her to the Supreme Court.

President Donald Trump’s last Supreme Court nominee, Brett Kavanaugh, nearly wasn’t advanced from the Senate Judiciary Committee, which vets nominees before deciding whether to send them to the Senate for a vote.

Sen. Jeff Flake (R-Ariz.) wavered on whether to approve Kavanaugh after sexual assault allegations were made public by Sen. Dianne Feinstein (D-Calif.), leading to the judge and his accuser testifying to the committee.

After Christine Blasey Ford, the woman, struggled to present evidence of her claims, and three supposed witnesses said they didn’t recall such an incident, the committee voted 8-7 on a party-line vote to advance Kavanaugh before a narrow 50-48 confirmation in the full Senate.

Flake is no longer on the committee, having decided not to run for re-election in 2018. The eight Republicans currently on the committee have signaled support for Barrett, making it more likely to be a smoother confirmation this time around.

“Judge Barrett is a brilliant legal thinker and will be an excellent Supreme Court Justice,” Sen. Ben Sasse (R-Neb.) said.

“She is roundly revered in legal circles for her well-reasoned and deliberate decisions, as well as for her commitment to applying the law as written, regardless of outcome. She is eminently qualified,” said Sen. Chuck Grassley (R-Iowa).

Sen. Josh Hawley (R-Mo.) called Barrett’s nomination “a big moment for religious conservatives,” who he said can call the judge “one of their own.” Barrett is a Catholic.

Only one GOP senator, Sen. Susan Collins (R-Maine), has committed to voting against Trump’s nominee.

Republicans hold a 53-47 majority in the Senate and judicial nominees require only a simple majority. In the case of a tie, Vice President Mike Pence would likely side with lawmakers from his party in confirming Barrett.