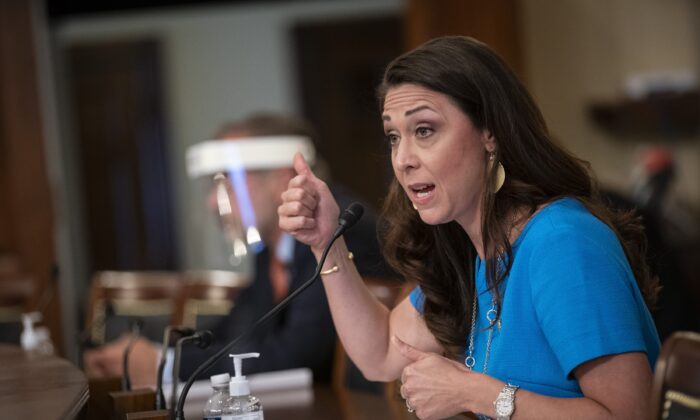 Republican Who Voted to Impeach Trump Concedes to Pro-Trump Challenger

“Thank you, Southwest Washington, for entrusting me six times with the privilege of representing you in Congress. Ever since I was first elected to this seat I have done my very best to serve my home region and our country,” Beutler said in a statement obtained by The Epoch Times.

“Though my campaign came up short this time, I’m proud of all we’ve accomplished together for the place where I was raised and still call home,” she added.

Beutler represents Washington state’s 3rd Congressional District. She has been in office since 2011.

Nearly 8,800 ballots were tallied in Clark and Thurston counties on Tuesday. After they were reported, the gap between Beutler and challenger Joe Kent stayed about the same, diminishing only slight from 960 votes to 928 votes.

There are 5,000 ballots remaining to be tallied in Thurston County, 500 left in Clark County, and 480 left in Cowlitz County, making it unlikely that Beutler overtakes Kent, who was projected to win on Monday.

Beutler said in her statement that she was proud of legislation she supported on healthcare, including the ACE Kids Act. She didn’t directly address her vote to impeach Trump, but said that she “always told the truth, stuck to my principles, and did what I knew to be best for our country.”

Kent, a military veteran, will now advance to the general election, where he will face Marie Gluesenkamp Perez, a Democrat business owner who received the most votes in the top-two primary.

Kent did not respond to requests for comment. He shared articles about Beutler’s concession on social media.

Kent was backed by Trump, and he aligns with the former president on a number of issues, including saying there needs to be heightened border security and immigration control. He has also said that the United States must push back against Chinese aggression, including imposing tariffs against Chinese imports and sanctions over human rights violations.

Beutler, who will remain in office until 2023, when the new Congress is sworn in, is the latest Republican who voted to impeach Trump to fall in a primary.

Several of the GOP members did survive tough primary races.

Rep. David Valadao (R-Calif.) emerged in second place in a top-two primary and will face California Rep. Rudy Salas, a Democrat, in the general election. And Rep. Dan Newhouse (R-Wash.) beat Loren Culp, a business owner who was endorsed by Trump.