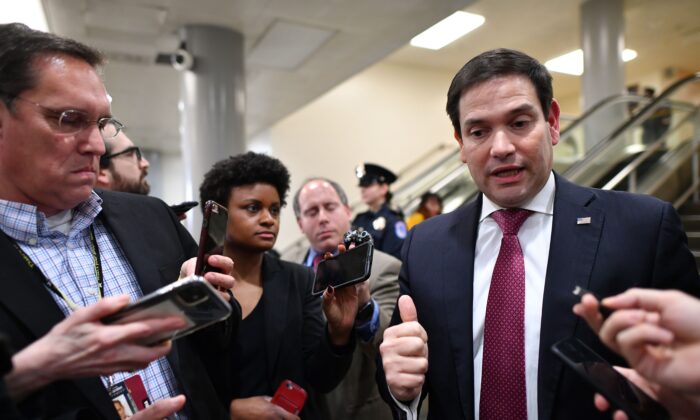 U.S. Senator Marco Rubio (R-Fla.) talks to the media as he leaves after voting in the impeachment trial of the US president on Capitol Hill in Washington on Jan. 31, 2020. (Mandel Ngan/AFP via Getty Images)
Politics

A group of senators led by Sen. Marco Rubio (R-Fla.) has announced plans to introduce legislation that would target major banks that deny services to federal contractors working with the Immigration and Customs Enforcement (ICE) agency.

The banks which the legislation targets—Wells Fargo, JP Morgan, Bank of America, BNP Paribas, Barclays, and SunTrust—have said they will no longer provide depository services to federal contractors that work with ICE, citing their opposition to immigration law in the United States. They control over $7 trillion in assets combined.

The FDIC Act will remove the Federal Deposit Insurance Corporation insurance of major banks with assets over $50 billion if they withhold services to federal contractors.

“Some of our nation’s largest banks have decided to cater to the radical left’s ‘woke’ agenda by abusing their systemic influence in our economy to deprive law-abiding federal contractors of banking services critical to their business,” Rubio said in a statement. “Banks have a right to deny funds to certain businesses, but they shouldn’t enjoy taxpayer-provided guarantees if they are undermining the public policy of the United States.”

Cruz, meanwhile, said in a statement that it is “deeply concerning” to see the largest banks in the United States “caving to the radical left’s social agenda.”

“Banks should be making decisions that are based on research and facts, not political pressure. I support our ICE agents and the contractors who work for them. They are risking their lives every day to keep this country safe. They deserve better.”

Major banks in the United States which violate the standards of the legislation will be subject to an FDIC board hearing and a transition phase of up to two years to terminate the insurance.

Blackburn added that he thinks it is “disgraceful” for big banks executives to sacrifice the nation’s safety for the sake of their political interests.

The Epoch Times reached out to the banks targeted by the legislation for comment, but both JP Morgan and Bank of America declined to comment.